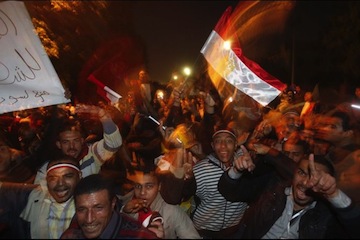 CAIRO, Egypt (GlobalPost) – As hundreds of thousands of Egyptians celebrated the ouster of President Hosni Mubarak, following an 18-day-long popular uprising that toppled his 30-year-old regime, many questions remain over the future of the political leadership in the Arab world’s most populous nation.

“President Hosni Mubarak has decided to step down from the office of president of the republic and has charged the high council of the armed forces to administer the affairs of the country,” said Suleiman in a brief statement aired on Egyptian state television.

On Saturday, Egypt’s ruling military declared its commitment to civilian rule and democracy, as well as the fact that all foreign treaties would stay in effect — including its treaty with Israel, signed in 1979.

For the anti-government protesters in Cairo’s Tahrir Square, the epicenter of the movement demanding an end to Mubarak’s autocratic regime, all that mattered was the former president’s departure.

“Victory is ours,” screamed Sherif Amin, a 28-year-old engineer. “We have finally overcome corruption and injustice.”

The joyous crowd of thousands erupted into a wave of surprise jubilation, hoisting up a sea of red, white and black Egyptian flags just seconds after the announcement reached the city center.

Fireworks and bright orange flames fueled by lit aerosol cans burst into the night sky, as crowds of young Egyptians sang and danced to the tune of whistles and heart-pounding bass and Egyptian tabla drums.

Cars and music-blaring mopeds raced up and down Cairo’s narrow streets, honking their horns to no particular rhythm, as thousands of people on the streets outside Tahrir chanted, “God is great.”

The mood in Tahrir was one of hope and empowerment, following years of economic stagnation and iron-fisted rule under Mubarak, one of the longest serving leaders in the Middle East.

“This feeling is indescribable,” said Mahmoud el Gawaby, who brought his family of 10, including his 2-year-old grandson Mohamed, to witness the historic moment. “Maybe in this new era, Mohamed here will be able to run for president some day.”

How and when the next elections will be held was still uncertain on Friday night.

Also unclear was the role of Suleiman, who was named the country’s vice president by Mubarak just one week earlier as a concession to quell the unprecedented strikes and demonstrations.

Field Marshal Mohamed Hussein Tantawi, a former Mubarak ally and minister of defense, was reportedly in charge of the country’s political affairs on Friday, in his role as head of Egypt’s Supreme Military Council.

A military statement earlier on Friday vowed to honor the “legitimate demands” of anti-government protesters, as well to eventually bring an end to Egypt’s 30-year-old emergency.

In a capital city alight with excitement, the army was still largely viewed as “liberators,” and a positive force for change, especially when compared to the feared and despised Egyptian police services — a target of much of the anger in the past three weeks.

“We’re all hoping the army will make the new changes — we want everything in Egypt’s politics to be changed,” said Ahmed Salah, 41. “It’s going to take some time, but we definitely trust the army.”

Parents in Tahrir took turns taking photos of their children next to machine-gun-wielding soldiers atop armed personnel carriers on the perimeters of Tahrir.

Throughout the night, Egyptians chanted, “The army and the people are one.”

President Barack Obama congratulated Egyptians after Mubarak’s departure, saying that Egypt’s army had acted “patriotically and responsibly as a caretaker of the state.”

Obama, however, underscored the need for democratic reform led by Egypt’s army.

“By stepping down, President Mubarak responded to the Egyptian peoples’ hunger for change. I am sure that there will be difficult days ahead, and many questions remain unanswered,” said Obama in a televised statement on Friday.

While Mubarak’s ouster energized the crowds in Tahrir, there were some concerns over proposed changes to Egypt’s constitution, specifically the status of articles restricting potential presidential candidates.

Under his plastic tarp tent taped against a government building on the edge of Tahrir Square, Mohamed Atef, a 28-year-old engineer, noted that Mubarak was also a military commander before becoming president.

Atef worried about the possibility of replacing one strongman for another.

All of Egypt’s presidents have come from within the armed forces since 1952, when a military-led coup overthrew the country’s former monarch.

“I’m not packing up this tent until all the demands are fulfilled. We want to know the status of the constitution, emergency law, and Mubarak’s parliament,” said Atef. “And most importantly, we want a civilian state, not a military one.”