Story originally published by GlobalPost on May 24, 2010: 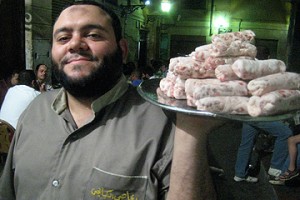 CAIRO, Egypt — At El Rifai, tucked away in a narrow corner of one of Cairo’s poorest neighborhoods, the only thing on the menu is meat.

For more than 40 years, this alleyway restaurant has been a carnivore’s dream, dishing up nightly over 200 pounds of fire-grilled kabob, seasoned lamb chops and tarb, a sausage-like stick of minced beef wrapped inside a layer of moist fat.

El Rifai is a local success story, having evolved from a metal street-cart near the Sayeda Zeinab mosque into a renowned, albeit shabby, eatery popular with movie directors, politicians and other celebrities.

But tough times have fallen on El Rifai. Soaring meat prices in Egypt have kept customers away, cutting business by one-third over the past few weeks. Waiters are receiving fewer tips, a vital chunk of their monthly incomes, and are suddenly worried for the future.

And so, last month, owner Mohamed El Rifai did what many Egyptians have done recently to voice their anger: he joined an organized protest, shutting the doors to his restaurant for a day.

“Meat in Egypt is just too expensive now,” said El Rifai, 66, owner and namesake of the restaurant. “By closing down, I lost some business, but it was nothing compared to what’s been going on recently.”

El Rifai was one of hundreds of restaurants in Egypt that banded together, pulling red meat from their menus out of frustration.

The one-day meat boycott exposed an entire industry rocked by higher prices, and highlighted the fact that red meat — a staple in this most populous Arab country — is increasingly becoming a delicacy that average Egyptian families can no longer afford.

By comparison, nearly one-fifth of Egypt’s population of 80 million earns less than $2 a day.

And last month, the price of meat shot up more than 30 percent.

Restaurants could no longer afford to serve meat, said Wagdy El Kerdani, chairman of a business association representing more than 1,300 restaurants in Egypt.

“We had to strike, even if only for one day, to put down the price of meat,” said El Kerdani. “We couldn’t keep raising our prices, so we took action to stop eating meat altogether.”

The move was aimed at butchers and distributors, who El Kerdani believes unfairly increased prices.

But butchers too are feeling the pinch.

Just down the street from El Rifai, Mohamed Ibrahim runs a small butcher shop, easily recognizable by the large leg of beef hanging by hooks out front. Customers, he says, have dwindled in recent months and layoffs may be imminent.

Magdy Sobhy, an expert at the government-funded Al-Ahram Center for Political and Strategic Studies think tank, believes that the problem is not enough competition at the top of the distribution food chain; a few meat “cartels” are controlling imports and prices, he argues.

With all the finger pointing, who is to blame over the high prices?

Most economists agree that Egypt’s government is the biggest culprit, having failed to create a long-term plan to maintain adequate supplies of local beef.

The government’s decision to cut loans to farmers, which compensated for the high worldwide costs of animal feed, has resulted in shortages of up to 1 million head of cattle in Egypt, according to Monal Abdel-Baki, a professor at the American University in Cairo.

Most Egyptians now receive the majority of their proteins from other staples, like chicken,fish and foul, a cheap dish of cooked fava beans.

But with malnourishment and high levels of anemia throughout the country, Egypt has to provide incentives for farmers to start growing beef again, said Abdel-Baki.

“The economic costs of poor nutrition are very high,” he said. “The government is losing if it does not make protein more accessible, in terms of poor health, less productivity and lower longevity. It cannot afford to do anything but keep prices stable.”

The recent meat boycott comes at a time of relative upheaval in Cairo.

For months, hundreds of protesters have passed through and occupied the streets near Egypt’s parliament building, calling for reform over workers’ rights and other economic issues. Earlier this month, protesters and police clashed during a demonstration to demand an increase in the minimum wage, a meager $7 a month.

Egypt has a long history of shortages in basic food staples turning into political liabilities for the government.

In 1977, riots broke out in cities across Egypt after subsidies for bread were slashed and prices increased. Clashes also occurred in 2008 when the international cost of wheat caused bread shortages throughout the country.

For now, meat prices have returned to near pre-boycott levels.

El Kerdani immediately called the strike a success, threatening to repeat it if prices went up again.

Many economists, however, are doubtful of the boycott’s effectiveness or relevance. A majority of smaller restaurants ignored the boycott. The only people really affected, say analysts, were Egypt’s upper and middle classes, the relative minority who can afford to buy meat anyway.

Nowhere is that more obvious than at El Rifai, where the waiters and support staff work with meat all night, but can hardly afford to buy it for themselves.

Wahid Mohamed works in one of the meat lockers at the far end of the alley, slicing shanks of freshly slaughtered beef and lamb for the cooks. He’s worked at El Rifai all his life, but still only makes $6 a day.

That’s barely enough to buy meat for his family once a month, Mohamed eventually admitted.

“See those cats down there?” he said, pointing with his knife towards a group of strays feasting on scraps below his chopping block. “They’re much luckier than us — they get to eat meat every night, all night long.”