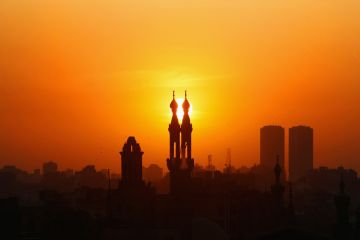 “Allahu Akbar [God is great]! There is no God but Allah, and Mohamed is his prophet,” he cries into a microphone in a small mosque on the Street of Flowers in the Sayeda Zeinab district.

Those simple words, as old as Islam itself, form the first part of the adhan, or the Islamic call to prayer. For Muslims, it is soaring, almost melodic poetry, summoning and uniting the faithful below to a five-times daily prayer.

The sheikh’s voice, amplified through a distorted megaphone perched just outside the mosque, booms and echoes off the neighborhood’s worn buildings and throughout its narrow alleyways.

It’s a bit too loud, according to the Egyptian government, especially considering that the other estimated 4,000 mosques in Cairo all perform the same adhan at slightly varying times with different voices.

A recent decree by Egypt’s Ministry of Religious Endowments aims to reduce the cacophony, syncing mosques like Gamal’s into a unified system that will eventually broadcast a single voice reading the prayer call through every mosque in Cairo.

The move – which started rolling out in select mosques earlier this month – has not been without controversy.

“I do not want them to sync our mosque,” said Sheikh Gamal. “The prayer call needs to be loud so that more people can hear the adhan. And there should not be just one voice reading the adhan in Cairo.”

Sheikh Gamal is just one of a growing number of Cairo residents who believe that the decision to unify the mosques symbolizes a government attempt to impose greater control over their faith.

And just like New Yorkers grappling with their city’s decision to build a Muslim community center near Ground Zero, many here in Egypt’s largest metropolis have spent the past several weeks engaged in a similar debate over what they describe as their own religious freedoms.

In Islam, the muezzin, who five times a day announces the call to prayer, plays a highly esteemed role in the community. Many Muslims believe that the muezzin receives greater rewards in the afterlife.

Khaled Abdallah, 42, has always dreamed of performing the adhan at his local mosque in the western neighborhood of Imbaba. Now that the prayer call is to be unified, Abdullah fears he will never get that chance.

“I can read the adhan without a microphone, but it won’t be the same,” said Abdallah, a lawyer by training but taxi driver by profession. “This is the government taking away my religious rights.”

At the heart of the debate is the all-important Friday sermon, a longer prayer performed on the Muslim holy day through loudspeakers in each mosque in Cairo.

Throughout the city, the Friday prayers vary in length and subject matter. Sermons are not only religious, but also sometimes discuss political and social issues affecting the various neighborhoods.

Some Egyptians are suspicious that mosque unification is the first step in Cairo’s plan to control the script and delivery of the Friday prayers.

“A danger is that the government could attempt to synchronize and control more, which could ultimately lead to greater censorship,” said Said Sadek, a professor of sociology at the American University in Cairo. “If the government is trying to control the mosques in this way, it would be very problematic.”

The government, however, vehemently denies that mosque unification will ever lead to the regulation of Cairo’s Friday sermons.

Sheikh Salem Abdel-Gelil, the driving force behind the project at Egypt’s Ministry of Religious Endowments, admits that much of the criticism his office has received called the project “un-Islamic”, despite having received approval from the nation’s highest religious authorities.

Abdel-Gelil says the ministry was merely reacting to the large number of public complaints over noise levels, as well as the quality of the voices reading the adhan.

“We were trying to do something that is good for both the religion and the people,” said Abdel-Gelil. “Any new technology is always controversial here because people like sticking to the old ways. But change and progress are required if we are to stay up-to-date as the world moves forward.”

Similar unification plans have proven successful in other large cities throughout the Middle East, including Istanbul, Amman and Sa’ana.

Whether or not Cairo, however, with its slow-moving, sometimes inefficient bureaucracy, can pull this project off remains to be seen.

After six years of planning, technical glitches involving the computerized receivers placed in the mosques delayed the launch earlier this month. So far, only 40 mosques have successfully been synced with Cairo’s downtown live prayer-reading studio.

Despite the initial snags, Abdel-Gelil considers this project a victory. Above all, he says, Cairo’s notorious noise pollution is slowly improving.

In the suburbs of Nasr City, Ahmed Abu Sambra, 30, is eager to end the “confusion” over hearing several prayer calls played on different schedules.

“Personally, I’m all for the mosque unification. When you hear the adhan now, it’s all jumbled and distracting,” said Abu Sambra. “The intent of the adhan is to bring Muslims together, but right now, it does not.”

For others in this “city of a thousand minarets,” the adhan can never be too loud.

This is, after all, a capital where the constant clamor of car horns competes with screaming vegetable vendors. A city where only children lighting fireworks on the streets can break the racket of men beating on metal gas canisters. And where all-night wedding parties frequently blare over-modulated pop music well into the wee hours of the morning.

Ahmed Hassan, 34, lives in a small apartment in the working class Nasreya neighborhood, directly opposite an amplifier from a nearby mosque. For Hassan, the adhan is a tradition that must bellowed with pride.

“The call to prayer can never be too loud, even at four in the morning,” said Hassan, shouting over a carpenter operating a power-saw just down the alley.