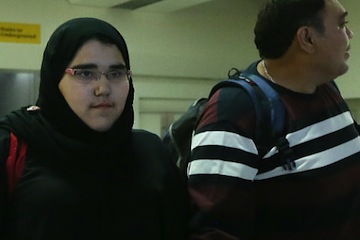 ABU DHABI, United Arab Emirates (CNN) – The father of a 16-year-old on Saudi Arabia’s Olympic team said his daughter has been called names by people in her home country for competing at the London Games.

Wojdan Shaherkani was one of two women who competed in the Olympics for Saudi Arabia, which was one of three countries that agreed for the first time to send women to compete at the Games.

“Some people hid behind (fake) Twitter accounts, and they said bad things about my daughter and myself,” Wojdan’s father, Ali Seraj Shaherkani, told CNN recently.

“… After the competition, I returned home, I read on Twitter that somebody said bad words about my daughter. Three people on Twitter accused her of being a ‘prostitute.'”

He said he filed a complaint with the Ministry of Interior over the name-calling.

“In religion, if anyone accuses a woman of being a prostitute, he has to prove it or receive lashes or punishment,” Shaherkani said.

Wojdan made history during the Olympics when she was selected by the kingdom to compete in judo at the Games, though the opportunity was almost derailed when the International Judo Federation said she could not compete wearing a head scarf.

The teen and her father signed an agreement with Saudi Olympics officials that she would be allowed to compete only if she wore “correct and approved” clothing that “sticks to Islamic principles,” according to Saudi National Olympic Committee representative Razen Baker.

An agreement was eventually struck between Saudi Arabia, the International Olympic Committee and the Judo federation.

Wojdan was dispatched quickly in her first match, losing to 28-year-old Melissa Mojica of Puerto Rico in one minute, 22 seconds.

According to quotes provided by Olympic officials after the match, Wojdan called the experience “the opportunity of a lifetime.”

“Hopefully this will be the start of bigger participation for other sports also. Hopefully this is the (beginning) of a new era,” she said.

Her father knew she would likely lose, saying she had never competed in front of an audience before her match at the Games.

But in defeat, Shaherkani said he was even more proud of his daughter.

The audience of 15,000 at London’s Excel Center applauded the teen.

“She was smiling on the way out. She told me ‘I did it. Next time I’ll win.’ I cried when I heard that,” said Shaherkani, who worked as a referee in the men’s Judo competition.

Perhaps the most difficult thing for the family has been the reaction of some in their native Saudi Arabia.

“I want everyone to respect my daughter. I respect all the people talking about my daughter when she went to London – they either accepted her trip or not,” Shaherkani said.

“I respect all these people. But whoever talks bad about my daughter, will be punished.”

The family has seen a change in attitude since Wojdan began her Olympic journey.

Before the Games, Shaherkani about 75 percent of the people in the country disapproved with his daughter’s Olympic effort “because it’s a new thing for Saudi Arabia to go outside the kingdom as a woman and compete in public.”

“People think we are breaking our religion. But in our mind, we are not doing that. We are doing something I am proud of,” he said. “We gave the whole world a good picture of the women in Saudi Arabia.”

Since the competition, he said “maybe 80 to 85 percent” agree with his daughter’s effort.

“I hope my daughter can perform in the next Olympics in 2016. In four years she will be better,” he said.

“I think my daughter will get some medals some day.”