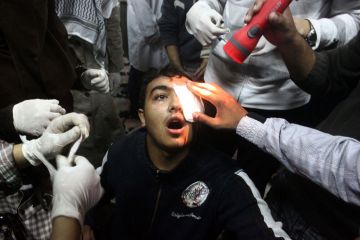 Egyptian security forces clashed with swelling crowds of anti-government demonstrators in Cairo’s Tahrir Square on Monday, for the third straight day, following a bloody weekend of street battles in the capital that left at least 20 dead and hundreds injured.

Riot police fired endless rounds of tear gas and rubber bullets into crowds near Cairo’s city center, but were ultimately unable to disperse the thousands of protesters who remained in Tahrir Monday afternoon.

The three-day-old protest movement, which is demanding the removal of Egypt’s transitional military leadership, had reportedly spread to cities around the country over the weekend, including Alexandria and the canal city of Suez.

Many in the country were already comparing the ongoing clashes to the country’s January uprising, when hundreds of thousands of Egyptians successfully challenged the police and forced the ouster of former president Hosni Mubarak.

“Down with military rule!” Egyptian protesters screamed throughout the day, charging into police gunfire with makeshift cardboard shields, rocks, and Molotov cocktails.

The unrest seemed to be spiraling out of the security forces’ control on Monday, raising serious concerns that the nation’s upcoming parliamentary election would not proceed as scheduled on Nov. 28.

1,700 hundred people were injured in the clashes over the weekend, CNN reported on Monday.

Two of the dead were reportedly members of Egypt’s Current Party, a new movement of youth who split from the Muslim Brotherhood following the January uprising.

At least 54 protesters were arrested over the weekend, according to Al-Masry Al-Youm.

Videos and pictures of police brutality at protests that were circulated on social media websites Sunday only fueled the demonstrators’ anger on Monday.

Eyewitnesses reported police torture of detainees, including beatings, over the weekend.

Egypt’s culture minister, Emad Abu Ghazi, resigned from the interim cabinet on Sunday in protest over the military government’s handling of the protests, according to the state-sponsored Ahram Online.

At least one presidential contender, conservative Salafi preacher Hazem Abu Ismail, called on his supporters to continue with protests.

Egyptian officials announced that elections would proceed as planned, although several political parties suspended their campaigns in protest over the government response to the ongoing clashes.