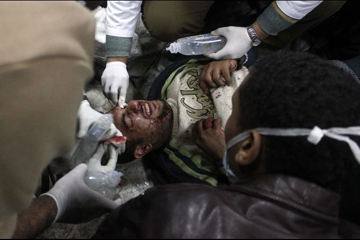 CAIRO, Egypt — Egyptian security forces battled with protesters in the streets of central Cairo on Sunday, for a second straight day, as crowds of demonstrators continued demanding an end to military rule in Egypt.

At least two people died and nearly 700 were injured over the two days.

The momentum of the clashes, as well as the positions of security and the swelling crowds, shifted several times throughout the day on Sunday.

By nightfall, thousands of Egyptian protesters had repelled an assault on Cairo’s Tahrir Square by hundreds of riot police reinforced by a contingent of military troops and armored vehicles.

The violence began on Saturday afternoon in Tahrir – the epicenter of the protest movement that forced the ouster of former president Hosni Mubarak in February.

“The people want the downfall of the Field Marshall,” screamed protesters, referring to Egypt’s top military leader, Mohamed Tantawi, who replaced Mubarak as the de facto president earlier this year.

Police fired successive volleys of tear gas and rubber bullets into a crowds of protesters throughout the night and well into Sunday. But they were unable to disperse the demonstrators, who returned fire by hurling rocks, bottles, and Molotov cocktails into police lines.

Protesters, however, buoyed by growing ranks of thousands, eventually repelled all security forces to take control of the downtown area of the capital.

Earlier on Sunday, police and protesters had dug in and set up hardened battle lines that shifted back and forth several times throughout the intense battle.

The street fight occurred mostly on a football field-sized length of Mohamed Mahmoud, a street in downtown Cairo.

Mohamed Mahmoud Street is symbolic because of its close proximity to Tahrir. It is also a strategic buffer for police because of the nearby interior ministry, the fortress-like headquarters of Egypt’s security forces.

The black asphalt had turned beige, covered with broken rocks, glass bottles, and empty tear gas canisters. Several makeshift barricades, including one up-ended and torched car, were also constructed on the street by both police and protesters.

“No to military rule!” screamed protesters.

Egypt’s army assumed control of the country on February 11, the same night Mubarak was ousted.

Initially revered as the “defenders of the revolution,” resentment of the military is growing. Critics accuse the army of being unwilling to transfer power to elected officials.

Tantawi did not address the nation, despite reports that the field marshall would speak or appeal for calm.

Instead, the military appeared on the streets of Cairo Sunday evening and joined with police on a successful, but temporary, assault on Tahrir.

The recent protests are unprecedented both in scale and protesters’ boldness to confront Egypt’s military. Al-Jazeera reported that similar clashes had spread to Alexandria and the city of Suez in the northern Delta.

The latest violence comes just over one week before Egypt’s first post-Mubarak election.

Egyptians head to the polls on Nov. 28 to elect a new parliament that will one day be tasked with writing a constitution.

A number of politicians have already suspended their campaigns to protest “police brutality” during Sunday’s clashes. Police arrested dozens of protesters from the Tahrir protest on Saturday and Sunday. Many were beaten, punched, slapped, and kicked during arrest.

“The Socialist Popular Alliance Party has urged its members to take to Egypt’s squares to “defend the revolution and its goals” and called on its parliamentary nominees to suspend their electoral campaigns.”

In Alexandria, election posters were torn down by protesters who said there was not enough time, according to an Al-Jazeera journalist.