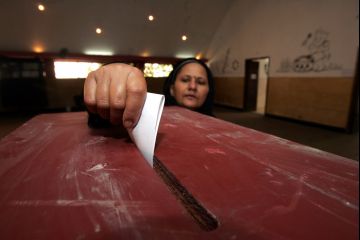 CAIRO, Egypt — One year ago, Mahmoud Salem wrote about Egypt’s elections with cynicism and disillusionment.

The 30-year-old Egyptian blogger, best known for his irreverent political musings on his blog, “Rantings of a Sandmonkey,” warned his readers at the time that the “cartoonish” 2010 parliamentary elections would be rigged by Egyptian authorities.

“Don’t forget to go to the polls and vote for two people on your ballots. That might invalidate your vote, but at least it won’t allow them to steal it,” Salem wrote last year.

That was in a different Egypt, long before the Jan. 25 uprising when Salem joined hundreds of thousands of Egyptians in a successful revolt against the autocratic rule of Hosni Mubarak.

Nine months later, Salem is no longer criticizing the system — he’s participating in it. He is running for parliament in the mostly middle-class Cairo district of Heliopolis under the banner of Free Egyptians, a newly established secular political party.

Salem is one of several young revolutionaries who now see the official structures of power as the best option for implementing democratic reform in Egypt. They are hoping that fresh perspectives and maverick ideas will enliven a political scene that was mostly stagnant during Mubarak’s 30-year tenure.

Yet these idealistic newcomers bring little political experience into a race expected to be dominated by veteran politicians and well-oiled grassroots movements from an older era.

Salem, a self-described “new media douchebag,” boasts that several thousand of his 50,000 followers on Twitter will vote for him in Heliopolis. But he also recognizes the need to translate that online popularity into a modern political campaign that will resonate on the Egyptian street.

“It wasn’t my intention to run,” Salem said. “But when I looked at the candidates who are planning to run, I didn’t find anyone that I’d be willing to give my vote to. So I decided, why not me? The revolution made me realize that this was possible.”

Salem’s anonymous activism and political dissent began in 2004, when he returned to his native Egypt after years of studying business and finance at Northeastern Univeristy in Boston, Mass. At the time, blogging was one of the few unguarded areas in a nation that was tightly controlled by Mubarak’s all-powerful security apparatus.

The “Sandmonkey” pseudonym provided Salem the protection to write freely, especially on controversial topics. He used the blog to lambaste Mubarak-era policies, challenging the regime on corruption, police torture and repression of the free press.

During the uprising, Salem finally revealed his identity to his fans. After he was detained and beaten by a crowd of pro-Mubarak supporters at a protest in early February, Salem said he wanted to come out with his name in open defiance of the country’s security services.

By then, Salem had already managed to attract a large following both in Egypt and abroad with cheeky and often subversive language as a hook. Many of his pre-uprising posts were laced with profanity.

Even his moniker, “Sandmonkey,” a derogatory term for Arabs, was chosen to grab attention and provoke a growing audience in the West.

“I wanted to make white people uncomfortable,” he said. “The idea was to present a different image of an Egyptian, an educated Egyptian who speaks English, wants to live in a secular country and doesn’t believe in terrorism.”

He frequently questioned the pervasive anti-Israel sentiment in the country and disputed the street popularity of the Muslim Brotherhood, Egypt’s once-banned Islamist movement.

Salem’s earlier posts sometimes contained references to drinking alcohol, were filed under tags like “babes” and “pervy,” and one even analyzed the bikini worn by Princess Leia during a scene in Star Wars.

Looking back, Salem admitted that some of his earlier posts might have been a bit “juvenile.” But he discounted the idea that any of it could harm his candidacy.

“Whoever is going to judge me for what I’ve done in my early 20s is an idiot voter,” he stated with characteristic bluntness.

Following the uprising, Salem’s blog posts revealed a new depth of political discourse and topic choice, including one that outlined in specific detail the steps he thought were necessary to set up a democratic election campaign in Egypt.

Salem the candidate is now actively working to broaden his appeal among average voters and he has swapped his T-shirts for a suit, complete with an Egyptian flag pinned to his lapel. He has also taken down the blog.

“You’re prone to self-censorship, which sucks,” he said. “When you’re writing on Twitter, you can’t curse or engage in fights anymore because it dilutes your message and presents you in a light that’s unfavorable to the average voter.”

These days he is holding campaign lectures and seminars, and he can eloquently describe his ideas to reform Egypt, including plans to implement greater transparency of government, increasing funds for small businesses, and introducing new recycling plants to combat Cairo’s ever-present mountains of waste.

Ziad Akl, a researcher at the state-funded Al-Ahram Center for Political and Strategic Studies, is excited to see young, idealistic revolutionaries like Salem run for office in the new Egypt.

But he believes they will struggle against more experienced and established opponents.

“The chances for someone who is relatively unknown, even if they have a large base on Twitter, will be lower if they don’t fit the established paradigm of the ‘Member of Parliament’ in the Egyptian culture. And that is someone who is viewed as capable of dealing with the affairs of the state,” Akl said.

Several former members of Mubarak’s now dismantled National Democratic Party are running for parliament under new political parties. The NDP remnants, along with the well-known grassroots mobilization techniques of the Muslim Brotherhood, are each expected to win a substantial plurality when the elections are held later this month.

Although Salem is facing off against two other high-profile, liberal activists in Heliopolis, he said he expects the real competition to come from the establishment — the Muslim Brotherhood and former NDP members.

He remains optimistic, however, drawing inspiration from the fact that Egyptian youth activists were able to topple Mubarak’s regime in a mere 18 days.

“There is a very good chance we could win. I’m hopeful,” he said. “One of the hallmarks of this revolution is that no one can predict anything.”