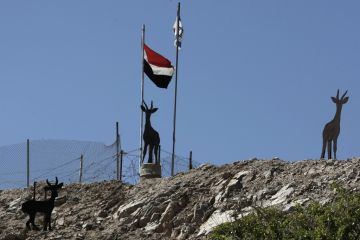 TABA, Egypt — An Israeli man detained for more than four months in Egypt on espionage charges returned home on Thursday, as part of a coordinated prisoner exchange. Twenty-five Egyptians were released from detention centers in Israel as part of the deal.

The alleged spy, 27-year-old Ilan Chaim Grapel, was flown from Egypt to Israel Thursday afternoon. The Egyptian detainees, three of whom were minors, were bussed across this sleepy Sinai border post from the Eilat region of Israel shortly after their release on Thursday.

Grapel, who also holds American citizenship, was freed following weeks of high-level diplomatic negotiations between officials from Egypt and Israel, in a deal brokered by the United States.

The talks that led to the prisoner swap could be a major step towards repairing a recently strained relationship between Cairo and Tel Aviv that intensified three months ago because of events not far from this border crossing.

On Aug. 18, Israeli soldiers crossed into the desolate Sinai desert just north of Taba and killed five Egyptian border guards during a botched manhunt for militants that attacked vehicles in Israel earlier that day.

In Egypt’s capital, public outrage over the killing of the guards — along with the tepid response by the nation’s ruling military council — culminated last month when a mob of Egyptian protesters stormed the gates of Israel’s embassy in Giza.

Blue and white Israeli flags went up in flames as the embassy’s diplomatic staff evacuated the country. Some Cairenes vociferously demanded the annulment of the 1979 peace treaty between the two nations.

But a world away from Tahrir Square, the frenetic home of Egypt’s almost ever-present protests, along the deserted stretch of sandy Sinai coastline that extends south of this border post, some Egyptian Bedouins seem to have a more nuanced view of relations with their Israeli neighbors.

“What happened at the Israeli embassy last month was not right. I felt so bad when I heard the news,” said Hany Gelbanah, 36, owner of a small beachfront hotel just north of Nuweiba.

In one of the world’s most contentious regions, where Egypt, Israel, and Jordan all intersect within eyeshot of the coastal mountains of Saudi Arabia, many Bedouins see continued dialogue through tourism as an important key to any lasting peace.

The coastline between the border and Nuweiba, a quiet port village one hour to the south, is dotted with dozens of Bedouin-run campsite hotels made up of rustic bamboo bungalows on soft sand beaches.

Not long ago, hordes of Israeli backpackers spent their holidays in the cheap, thatched-roof cabanas of Nuweiba’s camps, just a short day-trip drive from Tel Aviv but miles away from the flashy five-star hotels in Eilat.

Tourism here plummeted in the last decade after the second Palestinian intifada and a string of terror attacks in Sinai — including coordinated bomb blasts outside hotels in Taba and Nuweiba in 2004.

The security situation appeared to worsen after the ouster of former president Hosni Mubarak in February. Tel Aviv warned its citizens of credible terror threats after a slew of attacks on a northern Sinai gas pipeline that serves Israel.

Many residents, both Western and Egyptian, argue that Nuweiba is still safe. Despite these assurances, the coastline now resembles a ghost town, with empty beachfront lots and abandoned construction sites the entire stretch north to the border.

Hany Gelbanah had to sell half a parcel of his already tiny strip of beachfront property after losing “150 percent” of his business since the January uprising, he said.

Still, the young Bedouin sees tourism as more than just dollars and shekels.

“It’s not just business, it’s about friendship. Israelis and Egyptians used to meet here in Sinai and share the same food, table, beaches, showers — after a weekend vacation, they left as friends,” Gelbanah said. “Those kinds of relationships are important for peace.”

Those friendships have often developed into lasting relationships.

Mohtawa Abu Aniz, 50, runs a small hotel on a craggy section of coast commonly referred to as “Devil’s Head” — and not far from one of the campsites that was bombed in 2004.

Abu Aniz is one of only a few thousand Egyptians married to Jewish Israeli women.

His wife and child live in Tel Aviv, but are able to make the six-hour drive down to the hotel once a month. Abu Aniz hopes that she, and other Israelis, will continue to feel safe enough to visit.

“We need peace between Egypt and Israel, and the Sinai should be open to everyone,” he said.

Not everyone here, however, is so comfortable with open dialogue.

Just north of Gelbanah’s camp lies the popular Basata, one of the first eco-lodges developed in Egypt. The beachfront hotel incorporates local Bedouin culture into everything from the meals to the domed Islamic architecture of the huts.

Basata is often so packed with tourists that some are forced to sleep in tents along the azure waters of the gulf.

Unless, that is, if Israelis are part of the exchange.

El-Ghamrawy claimed that he had many friends in Israel, but said that the politics of the Jewish state precluded them from being welcome at his hotel.

“We don’t advise Israelis to come to Basata. We have a lot of Egyptians and Arabs come here,” el-Ghamrawy said. “When you have Israelis here, you can never avoid political discussions. It would make a very, very stressed atmosphere.”

Comments like that, according to many Bedouins here, only serve to scare Israelis off from coming to the Sinai.

Just a few hundred feet down the beach from Basata, Hany Gelbanah has proudly placed a black Star of David wrought into an iron menorah in a center spot on the lone reception desk greeting visitors to his hotel.

The menorah was a gift, said Gelbanah, a faithful Muslim, from an Israeli tourist who used to spend Hanukkah holidays at his camp. It sits near a faded, hand-painted sign on the kitchen wall that simply reads, “Welcome.”

Of course, very few people pass through to see Gelbanah’s menorah these days. But he’s hoping that will change soon.

“Israelis should feel welcome to come to the Sinai. Unless we start talking, both sides will hate each other forever,” he said. “Our countries need to be talking.”