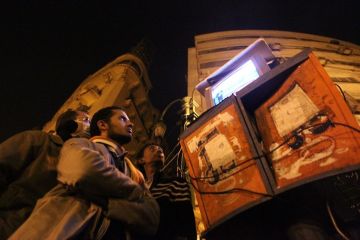 Producers for the Twitter-inspired program are scrambling through the cramped, one-room set in search of a cable. The second camera is still out of frame. A live-feed signal to Brinjy’s reporter, standing a few blocks away in Tahrir Square, has gone dead.

And for some reason, the internet on her laptop stopped working.

“I still get nervous every time we do this,” said Brinjy, 26, while fidgeting with her lapel mic. “The first time we did this, I was crying 10 minutes before we went on air.”

Minor technical difficulties seem to be a normal fact of life in the Nile-side studios of January 25 TV, one of the latest television stations to launch in Egypt since the ouster of former President Hosni Mubarak earlier this year.

The new satellite channel only started broadcasting in early April. And most of the station’s 42 employees are fresh out of college. Some of them have never even studied television before.

But the young reporters at TV 25 seem less concerned with technical prowess than with expanding Egypt’s rapidly growing free press, especially at a time when many journalists in the country fear that some of the more repressive hallmarks from Mubarak’s regime are returning.

For them, the revolution is still being fought — not on the streets or in Tahrir Square, but on the airwaves.

“We’re broadcasting what Egyptians need to hear, not what the state wants us to say,” said Yasmine Abu Khadra, a TV 25 news anchor. “We represent the people now, not the government.”

TV 25 is one of 16 new channels launched since the fall of Mubarak.

Egypt always boasted a relatively vibrant free press during Mubarak’s three decades of rule, especially when compared to its autocratic neighbors like Libya or Tunisia before the ouster of Zine al-Abidine Ben Ali.

But the possibility of heavy-handed government censorship was a constant threat. The editorial red lines — criticism of the military or the president and his family — were always well known, if not official government policy. In 2008, a prominent newspaper editor was jailed for speculating about the failing health of then 80-year-old Mubarak.

In addition to the limits of independent reporting, the once-dominant state television apparatus often ignored the realities on the ground.

During Egypt’s uprising, state television famously broadcast live pictures of a bridge over the Nile River, even as tens of thousands of protesters were descending on Tahrir just a few streets away.

“The media presented to us before was calculated on the idea that Egyptians are stupid,” said Muhammed Gohar, the executive producer behind the launch of TV 25.

“Mubarak stayed in power for 30 years thinking that if he controlled the TV, he’d stay in power.”

Gohar, 62, is no stranger to the limits of reporting in Egypt.

The self-described “media Pharaoh” made his career in Egyptian journalism in the late 1970’s by working with the likes of Peter Jennings and Barbara Walters. Gohar also worked as a cameraman during Walter Cronkite’s famous satellite interview with former President Anwar Sadat in 1977.

Gohar’s mission at TV 25 was to create a new network based on “freedom, democracy and social fairness” — and one that would not have to air the requisite daily news about Mubarak.

Social media — which many credit for helping to launch Egypt’s revolution — is a major part of their programming. Brinjy’s “Hashtag” collates news updates from Facebook, Twitter and YouTube to broadcast to the large segment of their audience who do not have internet at home.

The station’s low budget — TV 25 cost around $100,000 to launch — does not allow for professional sets or well-polished news packages.

But Gohar believes that raw, edgy news segments produced by revolutionaries will establish credibility with the same Egyptian youth who toppled Mubarak in Tahrir Square.

“Young people are the best brand in Egypt now,” Gohar said. “If our programs look like you could film them on a cell phone, people will want to watch.”

Gohar, however, is wary of pushing the interim military government too far. Even though political decisions of the military-led government are regularly questioned at his station, Gohar said that TV 25 would not be in the business of criticizing the army as an institution.

After all, there are still limits imposed on the press in Egypt.

In April, blogger Maikel Nabil was sentenced to 3 years in a military prison for publishing a post critical of Egypt’s army. Other journalists and broadcasters have been summoned to military offices for questioning over comments made about the army on television.

Even Mohamed ElBaradei, the former head of the International Atomic Energy Agency and possible presidential candidate, reported on Twitter that he was denied an appearance on state television last month.

At TV 25 as well, the future is uncertain.

But Gohar dismissed it, saying that nothing would stop his channel from televising Egypt’s ongoing revolution.

“We will keep working. None of us work by letters from authority anymore,” Gohar said. “Those days are long gone in Egypt, and they will never come back.”