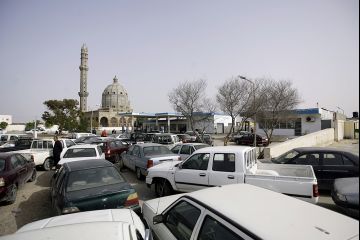 DJERBA, Tunisia – Tunisia’s once bustling tourist economy may be suffering as the three-month old conflict continues raging in neighboring Libya, but not everyone here is losing money.

On the tiny resort island of Djerba, a Mediterranean hamlet of whitewashed, five-star hotels and sandy beaches just a two-hour drive from the Libyan border, one motorcycle shop can barely keep up with the new demand.

“We’re selling up to 100 bikes a day,” said a young salesman at Motobikat, a dusty, one-room storefront for mopeds, motorcycles, and bikes in the main village of Houmt Souk in Djerba.

Djerba’s carpet dealers and hoteliers may be twiddling their thumbs, but the vendors at Motobikat are busy with eager buyers – and they sell a new moped at what seems like every few minutes.

These days, most of Motobikat’s customers are Libyans who cross the border on a day-trip to buy bikes that are either too expensive or no longer available in their war-torn home.

Ammar Ibrahim, a 40-year-old resident of Tripoli, drove five hours to Djerba just to buy two Thai-made mopeds for around half the price he would have paid in Libya.

More importantly, however, the mopeds drive further on much less gasoline – which is now in short supply in Libya – than his pickup truck.

“These bikes each hold a tank of gas and will last me two weeks,” said Ibrahim, 40. “The truck I’m driving them back in holds about 15 tanks and will only last me a few days. You do the math.”

Shortages of vital commodities like gasoline have become widespread throughout much of western Libya, where both international sanctions and the war between Libyan rebels and forces loyal to Muammar Gaddafi have largely crippled the economy.

“It’s so bad in Tripoli. I once had to wait for in line at a gas station for four days,” said Hatem, 30, a resident of the Libyan capital who came to Tunisia to buy a moped. “If you go looking to buy gasoline, you better be prepared to sleep there.”

The situation has become so dire that gas stations in Tripoli have reportedly become battlegrounds, where government forces now protect the pumps.

For many Libyans, mopeds are the only solution to the crisis – and businessmen can see the potential for growth.

Abdu, a motorcycle vendor in Tripoli, drives to Djerba every few days to purchase six Vespas. His customers in Libya buy them often enough to make the journey through the conflict zone, he said. “It’s maybe a bit of a dangerous road, but it’s worth the risk,” said Abdu.

With more and more Libyans getting around the gas shortages by driving motorcycles, some American companies may be taking note.

Harley-Davidson appears to be interested in the Libyan market – that is, if the seemingly never-ending conflict ever gets resolved.