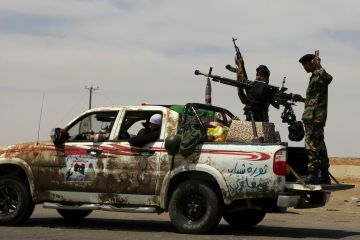 The mountainous region near the crossing has been under government siege since Libya’s uprising began two months ago.

The early morning gunfight is the first major victory on Libya’s western front for the ragtag alliance of rebel fighters seeking to topple Gaddafi and end his four decades of authoritarian rule.

The rebel win comes with the news that U.S. Predator drones will be used to carry out missions against Libyan government targets.

With the loyalist retreat, Libya’s government lost administrative control over the crossing into this southern region of Tunisia — its first border post to fall on a neighboring country outside of Egypt.

Elated young rebels celebrated their victory by hoisting two Free Libya flags into the air high above the border terminal.

“I’m so happy that we have finally won today,” screamed Osama Nalut, 21, smiling as he waved a red, black and green flag in the air.

Thursday’s fighting, recounted by Libyan rebels along the border with Tunisia, was the latest in a series of fierce battles raging inside and around Libya’s Nafusa mountain range — a besieged region of ethnic Berbers that has largely been obscured by ongoing conflict elsewhere in the country.

The Berbers, a North African tribe with their own unique language and culture, are indigenous to Libya’s arid Nafusa mountains.

Many Berbers complained of increasing marginalization — including not being permitted to study their own language in government schools — by the Gaddafi regime long before the uprising began in February.

“Gaddafi has never treated us as Libyan citizens. Our schools have always been worse than the rest of the country. And many of us have no jobs,” said Fadel Azaby, 21, an unemployed university graduate from the western mountain region.

The recent fighting on this desolate patch of land began after the Berbers living in Libya came out in support of the rebel uprising against Gaddafi.

Much of the fighting occurred in the mountain passes used by rebels to smuggle vital supplies from Tunisia into Libya — food, medicine, and most importantly, gasoline.

Libya’s government closed most access in and out of the western mountains in early March, effectively blockading the entire range, according to Libyan refugees now living in Tunisia.

“We did not have gas to cook with, fuel for our vehicles, and some cities did not even have electricity,” said Salem Magoura, 44, a Libyan who escaped into Tunisia over a week ago.

Safao Madi, a rebel fighter originally from the Nafusa mountains, said that resistance became impossible when Gaddafi’s troops rolled in with tanks and heavy artillery.

Short-range missiles and anti-aircraft weaponry were placed at the base of several mountains in the range, choking off some communities of water, food, and other supplies.

“People were too scared to go down the mountains in search of water, for fear of the Gaddafi troops,” said Yousef Amrou, a rebel leader, who added that some civilian non-combatants from the area had been captured and detained.

As living conditions worsened, thousands of Libyans started pouring into neighboring Tunisia in early April — many through distant mountain passes that cut around Gaddafi’s troops.

An estimated 14,000 refugees from the Nafusa mountains are now living in homes, community centers, and several camps of hastily constructed tent cities in towns throughout southern Tunisia, according to the United Nations refugee agency, UNHCR.

Most of the refugees are women, children, the elderly, and injured rebel fighters.

The influx adds more pressure to an already financially stressed UNHCR, which is dealing with thousands of refugees further north along the Mediterranean coast.

“As the mountain fighting gets worse, thousands of Libyans have entered into Tunisia in recent weeks,” said Firas Kayal, the local UNHCR spokesman. “We are appealing to the international community for more help because we have had to expand so much and so fast.”

Tunisia has opened its borders for more than 85,000 refugees since the conflict first began in Libya.

But some of the recent fighting — including intense shelling visible to witnesses along Tunisia’s border last week — has also spilled over into Libya’s neighbor.

Four mortars fired from Libya landed near Dehiba inside Tunisia on Wednesday.

And around 50 pro-Gaddafi troops crossed briefly into Tunisian territory during their retreat from Thursday’s rebel advance, before fleeing back home into the mountains, according to border guards on the Tunisia side.

Libya’s government promised to investigate the shelling and “take steps to avoid that incidents of this kind occur again in the future,” according to Tunisia’s official TAP news agency.

Some Libyans in Tunisia, however, worry that pro-Gaddafi attacks in the western mountains will only increase after the fall of their border crossing.

Mohamed Ibrahim, 43, a Libyan rebel sympathizer living abroad, has been helping to smuggle medicines and food supplies into Libya through the Tunisian side of the Nafusa mountain range.

As he prepared to cross into Libya with a shipment of medicine through the official border, now under the control of rebels, he wondered how long the terminal could remain open — and violence free.

“The [Libyan] regime has been trying to seal this area off for almost two months,” said Ibrahim. “There’s no way Gaddafi will leave this border crossing open to the rebels.”