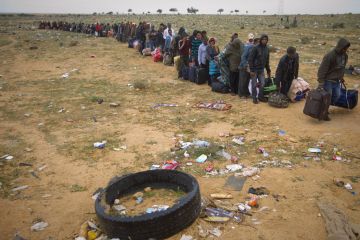 RAS JEDIR, Tunisia (GlobalPost) — When 26-year-old Abdel Gaffar Mohamed boarded a dingy off the coast of Tripoli last month, the Ethiopian mechanic was hoping to escape war-torn Libya by sailing to the Italian island of Lampedusa, a quick 150-mile journey over calm seas.

Instead, the small wooden boat, laden with dozens of other African migrants but lacking sufficient food, water, or even a working compass, drifted off course in the Mediterranean for nearly two weeks.

When the boat eventually washed up back on the Libyan coastline, only nine people on board were still alive. The others, including Mohamed, starved to death, according to survivors.

Now, Mohamed’s younger sister Fakia is mourning his death from the confines of a dusty refugee camp near this quiet border crossing with Libya.

But after a month of waiting here in limbo, she too is contemplating the risky voyage.

“I have no hope here. And if I go home, I could be killed,” said Fakia, shielding her tears with a veil. “I might be desperate enough to try the passage to Italy.”

Mohamed’s sister is one of tens of thousands of refugees who fled the conflict in Libya, fast approaching its third month, only to wind up in one of several sprawling tent cities along Tunisia’s border with Libya.

For most refugees here, going home has been a straighforward, if slow, process with help from Tunisia and other governments, the U.N. refugee agency (UNHCR) and various aid organizations.

But for the estimated 2,500 refugees who are unable to repatriate to nations already ravaged by their own wars, waiting for weeks in the grim living conditions on this desolate patch of desert feels increasingly hopeless.

And with no end in sight to the crisis here, rising anger and frustration is forcing some refugees to look north — to European shores accessible only by a perilous trip on makeshift boats, many of which rarely reach their destination.

“Life in Libya was so violent that I was forced to leave,” said Abdel Aziz Adham, a young migrant worker in Tripoli who already fled conflict once in his native Somalia. “But now I have no money, no job, nowhere to go and no one to help me.”

More than 85,000 refugees fleeing from Libya have secured safe passage home after entering Tunisia, according to the International Organization for Migration.

The process is not as easy, however, for citizens of countries like Somalia, Eritrea, Iraq and the Darfur region of Sudan, whose homelands are also unsafe.

Their best option is resettlement to a third country, according to Firas Kayal, the spokesman for Tunisia’s office of the United Nations High Commissioner for Refugees.

But only a limited number of refugees are accepted each year by United States, Canada and Australia — the three nations that typically receive the most asylum seekers.

“We are now discussing this issue with the traditional resettlement countries, and hoping the international community will respond to our appeals,” said Kayal. “Our efforts so far have been good and we’ve had some positive responses, but it is certainly not enough.”

For the unlucky few who must wait, life in Tunisia’s camps is becoming more and more desperate.

Refugees are prevented from leaving the camps, which are surrounded by chain-link fences and protected by Tunisia’s military.

Running water and electricity are limited at the overcrowded Choucha Transit Camp, a seemingly endless sprawl of thousands of sand-covered white tents.

Frustration there reached a boiling point this week, as refugees poured out onto a nearby highway, stoning passing vehicles, according to eyewitnesses.

Army soldiers reportedly fired warning shots into the air to disperse the angry crowds, who complained of a spike in crime inside the camp.

As conditions appear to worsen, refugees are beginning to set their sights on the UNHCR — the very agency mandated to protect them.

“There is no communication from the UNHCR. We need resettlement now, and none of us feel like they have any solutions for us,” said Numeri Gamal, a self-described member of the Ethiopian Oromo Liberation Front, which the government in that East African nation considers a terrorist organization.

Though the UNHCR has been lauded for its speedy response to the crisis in Libya, local staff of the refugee agency admitted they were not even aware of the presence of dozens of Iraqis and Palestinians now living in border camps.

“My biggest fear is that I don’t know where I’ll go,” said Bassem Mansour, 40, originally from the Gaza Strip. “I don’t even have a home. I’d be happy to go to the South Pole at this point.”

Other refugees are more hopeful.

Moussa Ibrahim, a 32-year-old Chadian refugee was brimming with pride this week at the birth of his son Khalifa, reportedly one of the first babies born in a Tunisian refugee camp.

“This week has been the happiest of my life,” said Moussa, who eventually admitted he has no idea what citizenship his 9-day-old son can now claim.

With more refugees taking resettlement into their own hands by boat, members of the European Union are at odds on how to weather the sudden influx.

Several EU nations have rebuffed Italian Premiere Silvio Berlusconi’s request for assistance with the more than 20,000 Tunisian migrants who have landed in Lampedusa since January. In recent weeks, thousands of sub-Saharan refugees displaced by Libya’s conflict have added to Italy‘s burden.

Berlusconi’s government, eager to halt the flow of migrants themselves, recently signed a deal with Tunisia offering assistance to increase its coastal police presence in the Mediterranean.

Laws aside, refugees in the camps complained that there are few other options available.

Sudanese Mahjoub Mohamed Ali has been “doing absolutely nothing” in a refugee camp since mid-March. With conflict and uncertainty in his native Darfur region, Ali will not be able to home any time soon.

Ali’s best hope, he said, is waiting for a resettlement to Europe or the United States that may never happen.

“I have no idea what I’m going to do,” said Ali. “But life here is utterly depressing. We have no computers, nothing to read, and we’re in the middle of nowhere. It’s just like being in prison.”