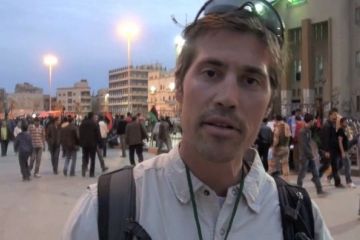 DJERBA, Tunisia (GlobalPost) — The Libyan government freed a detained Al-Jazeera journalist from custody today, the second reporter released by the regime of Muammar Gaddafi this week.

Ammar al-Hamdan, a cameraman for the Qatar-based television network, spent two weeks in “solitary confinement,” according to a report by the Reuters news agency on April 14.

Al-Hamdan, a Norwegian citizen, was reportedly also accused of spying for both Norway and Qatar.

Pro-Gaddafi forces captured al-Hamdan and three other journalists from Al-Jazeera on March 6 in the city of Zawiyah. His colleague, Mauritanian Ahmad Vall Ould Eddin, was released on April 11 after being mysteriously rearrested following his first release in March.

Meanwhile, Libyan authorities have still not yet confirmed the whereabouts of four Western journalists — including a correspondent for GlobalPost — who went missing in eastern Libya earlier this month.

Three foreigners matching the descriptions of Foley, Gillis and Brabo were spotted inside a detention center in Tripoli last week, according to sources inside Libya’s capital.

The sighting of Foley, Gillis and Brabo is the first confirmation that the captured reporters were transferred to Tripoli.

Witnesses reported that Foley, Gillis, and Brabo were captured by government forces on April 5 near Brega, an oil town in eastern Libya at the center of the two-month long conflict between rebels and forces loyal to Gaddafi.

Turkish diplomats in Tripoli said they were discussing the detentions with Libya’s government and hoped to secure the release of the journalists soon.

Turkey is one of the few countries still operating an embassy in Tripoli and has helped free a number of other journalists detained in Libya, including four New York Times reporters captured last month.

A Turkish official said that he hoped to have “good news” soon.

“We deeply appreciate the very important behind-the-scenes work being carried out by the Turkish Foreign Ministry and its staff who are negotiating with the Libyan authorities to secure the release of our journalists,” said Philip S. Balboni, CEO of GlobalPost.

Hammerl, the South African photographer, was initially thought to have been with Foley, Gillis, and Brabo at the time of their capture.

Hammerl’s location, however, is still unknown.

Now, South Africa has reached out to the United States for help finding and securing the release of the photographer.

South African President Jacob Zuma was in Tripoli earlier this week to meet with Gaddafi but was unable to raise the issue, according to sources.

Penny Sukhraj, the wife of Hammerl, told GlobalPost she was “shocked” that South African’s delegation visiting Tripoli did not do more to secure her husband’s release.

“We’ve now been given assurances that South Africa is doing more for [Hammerl] in Libya. Hopefully they are demanding, not just requesting, access to him,” said Sukhraj in an interview by telephone.

GlobalPost, working closely with The Atlantic and with USA Today, has dispatched a recovery team to Libya’s border crossing with Tunisia, where many of the detained journalists have eventually been released.

Plans are in place to receive the captured journalists and to facilitate their safe return home as soon as they are released.

GlobalPost has been in contact with Foley’s family and is working with all of the organizations involved, including the U.S. State Department, Human Rights Watch and the Committee to Protect Journalists, to gather information and secure the journalists’ release.

The parents of Foley, John and Diane, said in a statement that they were grateful to all the “compassionate” people who were working to free their son and the other journalists detained in Libya and the rest of the world.

“We want to sincerely thank you for caring about these fearless young journalists and photographers, whose passion it is to bring news from all the troubled parts of the world to us,” Diane Foley, his mother, said in the statement. “Thank you for your courageous efforts to negotiate their release and that of so many others detained throughout the world. May God bless you and all your efforts.”