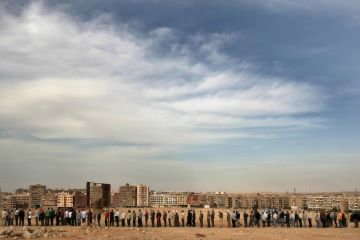 SUEZ, Egypt — As the popular uprisings sweeping across the Arab world turned increasingly violent over the weekend, from ongoing clashes between rebel and loyalist forces in Libya to the brutal state crackdowns on protesters in both Bahrain and Yemen, the region’s most populous nation passed its first major hurdle toward forming a democratic government.

Over 18 million Egyptians cast ballots in a constitutional referendum on Saturday, in a vote largely heralded as free and fair and marked by an unusually high turnout.

An overwhelming majority of Egyptian voters agreed with several proposed amendments to the country’s 1971 constitution, paving the way for parliamentary and presidential elections to be held later this summer.

The most significant of the changes – which were drawn up following the 18-day popular uprising that led to the resignation of former autocratic ruler Hosni Mubarak — will limit future presidents to two four-year terms and allow for freer competition by opposition candidates.

But for many in Egypt, this weekend’s vote was not just about who can and cannot run for president — it was a referendum over the continuation of the revolution itself.

“I voted ‘yes’ because I’m worried about our future,” said Hossam Ghazy, a youth activist living in Suez. “We still haven’t seen police on the streets here, and there has been a lot of chaos in our country since January. It’s time to return to normal.”

Throughout the country, Egypt’s military-led interim government has struggled in its attempts to re-establish order and stability in the two months since the uprising first started.

Ongoing protests and labor strikes have continued to disrupt life for average Egyptians. The country’s economy has been hurt as well. Egypt’s stock market has been shut since late January after having lost $12 billion in just two days.

A military-imposed nighttime curfew and tanks guarding the streets have failed to prevent several violent clashes — even in Cairo’s once peaceful Tahrir Square — over the past month.

More than a dozen people were killed in rare flare-up of sectarian violence between Muslims and Christians earlier this month, following the burning of a church south of the capital.

Even this weekend, a mostly calm day of voting was disrupted when Mohamed ElBaradei, a candidate for Egypt’s upcoming presidential election, fled from a polling station after getting pelted by rocks.

Despite the lingering disorder, many of those that took part in the revolution feel that still more political reform is needed before the country can proceed with elections and that the weekend amendments did not go far enough.

ElBaradei and other liberal opposition figures, in fact, had spent the past few weeks encouraging Egyptians to vote ‘no’ in the referendum, in a bid to toss out Egypt’s old constitution altogether.

Those opposed to the referendum — most notably the youth activists who led the charge against Mubarak in Cairo’s Tahrir Square — were not necessarily against the amendments, but were hoping that a popularly elected committee could write a new constitution before upcoming elections.

Many worry that Egypt’s current constitution, which provides for a wide range of powers for the presidency, opens a door for another autocratic ruler to take power in the future.

“The amendments are not bad, but they are just minor fixes to an already fabricated constitution,” said Ashraf Mohamed, an engineer living in Suez.

Egyptians who voted ‘no’ during the referendum also hoped to buy more time for independent candidates to establish themselves before the campaign begins.

With only a few months before Egyptians elect a new parliament, some independents worry that the already well-established political factions — namely the remnants of Mubarak’s National Democratic Party and the opposition Muslim Brotherhood — will have an unfair advantage in mobilizing voters.

Egypt’s Muslim Brotherhood, the largest opposition movement in the country, was one of the staunchest advocates for voting yes to the amendments.

“With such a narrow window, independents won’t have enough time to prepare adequately for the elections,” Mohamed said.

But for most voters in this bustling port city along the vitally important Suez Canal, more time without a clear leader meant more chaos.

Police forces have been slow, if not reluctant, to return to the streets in Suez, according to residents.

Popular anger during the uprising ran high in Suez, where residents were among the first to torch government buildings and police vehicles after one of their own, 20-year-old Moustafa Rageb Mohamed, became the first Egyptian ‘martyr’ killed in clashes with security forces.

Still, the majority of eligible voters in Suez opted to move forward with elections and put an end to Egypt’s revolution, despite the fact that they were some of the most vocal in calling for it in the first place.

“I voted ‘yes’ to finally get some stability back,” said Eman Abdel Fattah, 37. “With all the problems we’re facing, especially in light of what’s happening in Libya and Bahrain, we need security back on the streets immediately.”

Regardless of the divisions throughout Egypt, for most voters, the freedom to cast a ballot without intimidation by state security forces was a good enough step towards real democracy.

She, like many Egyptians, felt disenfranchised during Mubarak’s 30-year rule, after several elections were marred by irregularities like fraud, ballot-rigging and government-sponsored violence.

But during the referendum, Sadeya and other jubilant residents of Suez waited patiently for hours in lines at polling stations around the city, eager to have their voices heard in a new era.

“I never thought this day would come,” said Sayeda, proudly displaying the pink paint on her finger to indicate she had voted. “Finally our opinions actually matter.”