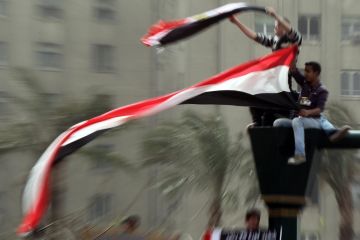 Several people were beaten with wooden batons and at least one protester was arrested, according to eyewitnesses.

Protesters in Tahrir Square and on the streets near Egypt’s cabinet building violated the military-imposed curfew on Friday, demanding the removal of the country’s new government.

Much of the anger was directed at the prime minister, Ahmed Shafik, who many regard as too close with ousted president Hosni Mubarak.
Awayda Mohamed, limping through Tahrir after being beaten on his right leg, said military police used electric batons to break up the crowd of roughly 200 protesters in the early hours of Saturday morning.

Egypt’s Supreme Council of the Armed Forces — in power since the resignation of Mubarak on February 11 — apologized through their official Facebook page on Saturday, claiming that violence was the result of individual scuffles with soldiers and not ordered by higher authorities.

The army also announced that all detainees would be released.

Egypt’s military is widely viewed as a protective force for the people – protesters often chanted “The army and the people, hand in hand,” during the revolution.

But some Egyptians now wonder if the trust between the two will remain.

“Probably, more Egyptians now will be suspicious of the army,” said Sarah el-Sirgany, who was in a cordon of protesters near the cabinet building early on Saturday. “I’m not sure if their apology will mend the problems that happened earlier today.”

On Friday tens of thousands of Egyptian protesters gathered in Tahrir Square, calling for greater political reform just two weeks after the resignation of President Hosni Mubarak, in a sign that many in Egypt believe their revolution is far from over.

Demonstrators demanded an end to the leadership of Prime Minister Shafik.

Bright pink stickers were distributed in Tahrir reading “Shafik = Old Regime” in both Arabic and English.

“We will stay here until Shafik leaves,” said Hatem Amin, 34, an activist protester. “He is a part of the old regime, and just as corrupt as Mubarak.”

The throng of peaceful demonstrators stopped the flow of traffic in Cairo’s normally jam-packed city center, mounting additional pressure on an interim government eager to end unrest in the Arab world’s largest nation.

Egypt’s Supreme Council of the Armed Forces, which has been running the country since Mubarak’s ouster on February 11, has struggled restore stability following weeks of protests and widespread strikes.

Workers throughout Egypt have challenged management in several sectors over the past two weeks, closing factories and bringing some public transportation to a grinding halt. From doctors to Suez Canal employees, Egyptian workers have been seeking higher wages and increased benefits, despite repeated calls by the military to stop striking.

Egypt’s stock exchange announced that it would not reopen until next week at the earliest. The market — which will have been shut for the entire month of February — lost around $12 billion in two days of trading when the unrest first erupted in January.

Several protests, sometimes violent, have flared up in other parts of Egypt as well.

Hundreds of demonstrators took to the streets of Maadi, an upscale, tree-lined neighborhood just south of Egypt’s capital, to protest police violence on Thursday.

Angry youths torched two security vehicles following a police shooting of a microbus driver in Maadi, according to eyewitnesses.

A verbal altercation between the policeman and the driver attracted a crowd of onlookers and resulted in several shots being fired into the air, one of which struck the driver, according to local reports.

Dozens of young men then apprehended the policeman, beat him nearly unconscious, and jumped on the roofs of the charred security trucks.

“We just have the feeling that nothing has changed,” said Rania Yehya, 34, a Maadi resident. “It’s injustice. Police officers are acting just like they did before the revolution.”

Egypt’s feared police force was a primary target during the country’s recent uprising.

Brutal crackdowns and corruption from the security services have led to a perceived sense of police impunity — much of which is believed to be sanctioned by Egypt’s emergency law.

In Tahrir Square on Friday, thousands called for the breakup of the country’s state security apparatus and chanted against the draconian emergency law — which has been in place continuously since 1981.