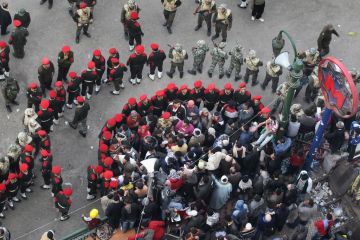 CAIRO, Egypt (GlobalPost) – As the first traffic returned to the streets of Tahrir Square on Sunday, following 18 days of anti-government demonstrations there that topped the 30-year regime of Hosni Mubarak, members of Egypt’s internal security forces took to the streets in a rare moment of protest.

Military soldiers guarding the building atop tanks fired several rounds of gunshots into the air at least twice on Sunday in an effort to disperse the raucous crowd of chanting police.

The protests continued in larger numbers Monday, with ranking officers in the crowds. The military urged all Egytians back to work in a TV statement and soldiers cleared most of the remaining protesters from Tahrir Square.

Many of their demands were wage related.

“I’ve been working in the force for 21 years and I only get paid 840 Egyptian pounds (roughly $145) per month,” said Ashraf Abdel Salam. “No one knows how much are we suffering.”

Many of the protesters, however, were also eager to distance themselves from a security force that has been tarnished by allegations of corruption, human rights abuses and the perception that police operate above the law.

For years, Egypt’s police have been a target of the type of widespread public anger that eventually led to Mubarak’s ouster — in part because of the brute force and harsh tactics they employed to help keep the former autocratic leader in power for three decades.

Uniformed security officers were ever-present during the few pro-Mubarak counter-rallies that gathered over the past weeks of demonstrations in Egypt.

But on Sunday, security forces chanted, “The people and the police are one,” and “Egyptians, we are your brothers, not criminals” throughout the streets.

Now that power in Egypt has shifted, some policemen offered a rare glimpse into some of the corruption they had witnessed, painting themselves as victims of mistreatment simply following orders. Their stories underscore some of the challenges that Egypt’s military-led transitional government faces as it attempts to fully redeploy the police to re-establish order and stability in the Arab world’s most populous nation.

In an ironic twist, police forces that once worked so diligently to prevent filming in public without difficult-to-obtain permits, sometimes even confiscating video cameras from journalists, swarmed around television crews outside the ministry asking to tell their stories.

“Some of the police are good, of course,” said Mahmoud Abdullah, a uniformed, low-ranking officer who said his wages were so low that he had to take a second job. “But from the corrupt ones, you can expect anything from beatings to humiliation, and sometimes even jailing innocent people.”

Abdullah said that many of Egypt’s police were aware of the allegations of corruption — and even worse.

“We’ve all seen the torture videos on YouTube,” said Abdullah, referring to a number of videos that have emerged online in recent years, showing beatings and use of coercion during interrogations.

Egyptian security personnel in detention centers often use torture to abuse prisoners, according to the 2009 U.S. State Department human rights report on the country.

Protesters blamed their former boss and interior minister, Habib al Adly, for violations and the decline of police reputation in Egypt. Some claimed that Al Adly had ordered the violence that broke out over the January unrest, where an estimated 300 people were killed.

Al Adly — now facing a travel ban while under house arrest — was sacked as part of Mubarak’s cabinet reshuffle in late January to appease anti-government demonstrators.

Protesters also demanded that Egypt’s new minister of interior, Mahmoud Wagdy, eliminate the threat of military court-martialing of police officers — one factor, they said, that dissuades junior ranking members’ from questioning the orders of the a better paid officer class that frequently mistreated them.

Abdullah also acknowledged that Egypt’s culture of “wasta” — an Arabic term loosely translated as “connections” — had seeped into the law enforcement community.

A simple phone call to a friend or relative in a high position, he said, is often all it takes to have a police officer look the other way for minor infractions, such as traffic violations.

Other officers blamed basic corruption on their low salaries.

A teary-eyed Mohamed Abdel Geleel implied that low wages meant that many policemen are forced to ask for bribes from citizens, even in purely administrative matters like filing basic paperwork.

“I need be paid well so I can treat others well,” said Geleel. “Believe me, if I get paid well, and feel respected, I will treat you the best way I can. I will even offer you tea.”

One low-ranking policeman who only went by the name Abu Abdullah detailed electoral violations he had witnessed.

Abu Abdullah said that saw vote rigging take place while he was securing a polling station in Agouza, a middle class neighborhood in Cairo, during Egypt’s parliamentary elections in November.

“Yes I witnessed rigging during the elections. I watched with my own eyes as election staff filled in multiple voting cards,” said Abu Abdullah. “But what could I do? I was following orders.” Past abuses like these have contributed to a widespread mistrust of the police in Egypt.

Egypt’s police forces largely disappeared from the streets of Cairo on January 28, after military tanks rolled in to the capital following massive demonstrations and clashes which saw several security vehicles trashed and torched.

In the security vacuum, the army asked the Egyptian people to help defend their neighborhoods from looters and vandals. Some private citizens armed themselves with sticks, chains, and knives and checkpoints.

Now, as the military-led transitional government races to rebuild security in the capital, police are slowly being redeployed to the streets. Their notoriety, however, may slow the process of beginning anew in the post-Mubarak era.

Even among police themselves, Egyptian security has a bad reputation.

During the protest on Sunday, several members of state security, watching from a guard tower along the high wall, recorded video of the renegade policemen demonstrating below.

“Why are they filming us right now?” asked one protester sarcastically. “What are they going to do? Arrest us and interrogate us afterwards?”