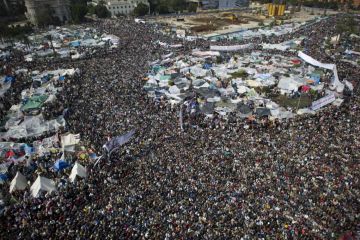 CAIRO, Egypt (GlobalPost) — Hundreds of thousands of protesters in Cairo erupted in celebration Friday after the country’s new vice president, Omar Suleiman, announced on state television that Hosni Mubarak, after more than three decades in power, had stepped down.

The announcement came not long after the military turned the turrets of its tanks away from protesters amassed in front of the presidential palace. But it remained unclear whether power would be fully assumed by Suleiman, who is a close confidant of Mubarak, or whether the military would take over.

Demonstrators have long said they wanted not only the removal of Mubarak but the entire regime.

The anti-government protesters gathered to pray in Tahrir Square on Friday morning, a day after Mubarak’s defiant speech to the nation announcing that his presidential powers would be transferred to his vice president, but that he would not step down.

The largest protests yet followed.

Angry crowds in Tahrir, however, noted that Mubarak did not resign the presidency and still retains power to sack both cabinet and the parliament, as well as propose amendments to the constitution.

The president’s speech sparked jeers and chants of “he must leave” from demonstrators packed into Cairo’s Tahrir Square. Protesters also waved their shoes in the air, a symbol of disrespect in the Arab world.

Moments after the Friday afternoon prayers ended in Tahrir Square, a sea of Egyptian flags were hoisted into the air, and thousands erupted into chants of “Get out!”

“Either they’re playing stupid or they really don’t understand,” Ashraf Sobhy, 50, said. “Maybe he’s only talking to Egyptians outside Tahrir Square. But here, it’s clear that no one wants him to stay.”

Following Mubarak’s speech, Suleiman made a televised speech to the country telling protesters to disband so the country could move forward.

Friday, however, was looking like it would be one of the largest protests yet in Egypt’s capital since the continuous demonstrations began on Jan. 25.

“I will not leave. We need Mubarak to leave,” said Nagla Rezk, 40. “These speeches were a political ploy. If Mubarak had vision, he would see Tahrir and listen to our demands.”

On Friday morning, Egypt’s army released a statement claiming that they were listening to opposition protesters and that their demands, including an eventual lifting of the country’s draconian emergency law, would be carried out and enforced.

Many in Egypt have welcomed the new role of the military, which has protected the streets of Cairo since the disbanding of the police forces in late January. But many in Tahrir were growing weary of its repeated refusal to support the removal of Mubarak.

And with repeated warnings to protesters not to expand their demonstrations beyond Tahrir Square, there were signs that Egypt’s army might be losing its appeal.

Dr. Abdel Ghani el Shahawi, a university professor of Egyptology, could not control his emotions during the prayers.

“I’m crying because I’m just so sad for this country. We are in a complete standstill, and our leadership is not hearing us,” he said. “The army has too much control in Egypt now — we need a Western-style democracy with leadership that listens to us.”

Meanwhile, the White House was consumed with a sense of “disbelief” after Mubarak’s speech, according to one U.S. official quoted by The Wall Street Journal. “This is really bad,” the official was quoted as saying.

U.S. President Barack Obama said the Egyptian people had been told “there was a transition of authority, but it is not yet clear this transition is immediate, meaningful or sufficient.”

On Thursday Obama urged Mubarak to immediately begin the process of handing over power, adding that the world was watching and that the turmoil should be turned into a moment of opportunity.

Protest organizers were calling Friday’s protest “Farewell Friday” and called on millions to turn out in a final attempt to force Mubarak to step down.

Overnight, more than 1,000 protesters moved to the presidential palace in the upscale neighborhood of Heliopolis. Dozens of them were still there on Friday morning, chanting “down, down Hosni Mubarak.” Soldiers did not try to remove them.

In addition to occupying Tahrir Square, pro-democracy protests have blocked access to the parliament building.

Thousands of protesters were also surrounding the radio and television building in Cairo, which they see as a mouthpiece for Mubarak’s regime. Soldiers and tanks were guarding the street that leads to the TV building, which overlooks the Nile, but they were not stopping the protesters from pouring in.