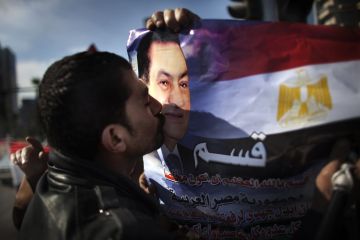 CAIRO, Egypt — Thousands of pro- and anti-government protesters clashed in central Cairo Wednesday despite calls by the Egyptian army for an end to the widespread protests, which have now entered their ninth day.

Supporters of Egyptian President Hosni Mubarak gathered by the thousands in Giza, a neighborhood west of Cairo on the other side of the Nile River. The pro-Mubarak supporters were angrier and more aggressive than the anti-goverment demonstrators as they marched toward Tahrir Square, the epicenter of the protests.

The situation grew tense when the Mubarak supporters reached the north side of Tahrir Square, opposite the world famous Egyptian Museum, and were met with reform demonstrators. It was unclear how the violence was first triggered, but once it did the clashes erupted spectacularly.

The pro-Mubarak crowd came prepared, carrying weapons including sticks and rocks. Protesters on both sides used crowbars to rip up chunks of asphalt, which they hurled back and forth at each other. Some Mubarak supporters arrived with a small cavalry of up to 10 hourses and at least one camel, all with riders armed with large sticks.

Reformers, who had captured several pro-Mubarak supporters, slapped them and spit on them, accusing them of being agents of the reviled security forces and the Mubarak regime. A number of the pro-government demonstrators, in fact, appeared to belong to the police force.

“Mubarak has divided the people with his speech,” said Karim Sabet, an anti-government protester. “We came here to be peaceful, but things are getting very ugly. I don’t want to be a part of this anymore.”

What had largely been peaceful protests since anti-government demonstrators overran Tahrir Square over the weekend, appear to have taken a worrying turn.

Mubarak announced Tuesday night on state television that he would not stand in planned September elections, but that he would stay to oversee the transition of power over the next seven months, appealing to Egyptians who worried about a deteriorating security situation in the country.

Following Mubarak’s statement, the army — which had said earlier this week that it would not fire on the crowds — called on protesters to clear the streets.

The 10,000 or so still standing in Tahrir Square when Mubarak’s announcement came at about 11 p.m. local time did not take the news well.

“We are angry, we want him to leave now, not months from now,” said Hassam Abdel Monem, a 27-year-old plumber whose voice, like most of the protesters here, was hoarse from days of screaming. “I will keep coming here every night until he leaves.”

The crowd erupted in anger after the recorded speech, which was broadcast on white sheets hanging in the square. Protesters, in one of the most insulting gestures in this region, removed their shoes and held them up in the air in the direction of the screens.

Hesham Al Bastawisi, 43, said he was happy that Mubarak would not run for re-election but worried the longtime authoritarian ruler would find a way in the next few months to hold onto power, either on his own or through someone allied with him.

“We are happy, but we don’t trust him,” Al Bastawisi said. “We need to be able to trust him. Those were just words. I have a lot of patience, I can wait this out.”

Karim El Rais, a student, was even more direct. “Mubarak didn’t say anything new. This is our revolution. We are ready to die here waiting for him to leave. My address is now Liberation Square.”

Mubarak, however, appears to be as stubborn as the protesters. In perhaps his most defiant moment, the embattled president declared to the protesters that, “I will die on Egyptian soil.” It seems Mubarak will not be going out like Tunisian President Zine El Abidine Ben Ali, who fled to Saudi Arabia in the wake of mass protests last month.

The president’s statement came after U.S. President Barack Obama urged Mubarak to not run in the upcoming elections, indicating the United States would no longer support its once strong ally.

Obama gave another televised address at 6:45 p.m., saying that he spoke directly to Mubarak and stressed the need for an orderly transition. While Obama was not clear whether that transition should occur under the leadership of Mubarak or not, he did say that the transition must be meaningful and peaceful and that it must begin now.

Anti-American sentiment has been high in the last few days. Egyptians said they were increasingly frustrated with what they called a “double standard” when it came to American foreign policy. They said the Americans promote democracy in some countries but not in others.

Egyptians celebrated the election of Obama and welcomed his speech to the Muslim world in Cairo in 2009. But lately, many Egyptians said, Obama’s foreign policy looks similar to that of former U.S. President George W. Bush, who was widely reviled in the Middle East.

Mubarak’s statement came after more than 200,000 people, in the largest demonstration yet, flooded Cairo’s main square on Tuesday, heeding the call of opposition leaders for a “march of a million.”

Protesters again turned out in droves on Wednesday, but were this time met with some opposition.

“These people have no sense of their own country,” said Allah Mohamed Ibrahim, 50, referring to the anti-government protesters.