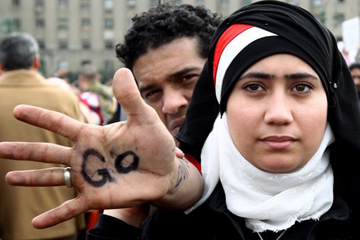 CAIRO, Egypt — Egypt President Hosni Mubarak said Tuesday night on state television that he would not stand in planned September elections, but that he would oversee the transition of power over the next seven months.

The president also said he would work to institute the reforms demanded by Egypt’s people during the last week of demonstrations.

The tens of thousands still standing in Tahrir Square when the announcement came at about 11 p.m. local time replied with the chant, “We are not leaving!”

The announcement came shortly after U.S. diplomats told the Al Arabiya television station that U.S. President Barack Obama had called on Mubarak to not run in the upcoming elections, indicating the United States would no longer support its once strong ally.

Mubarak’s statement came after more than 200,000 people, in the largest demonstration yet, flooded Cairo’s main square on Tuesday, heeding the call of opposition leaders for a “march of a million.”

Egyptians came from all over the country to join what became the culmination of a week-long uprising aimed at removing Egypt’s long-time authoritarian ruler from power. Egyptians from the countryside said they had walked several hours from their homes to get to Cairo after the government shut down the train system.

Mohamed ElBaradei, the Egyptian Nobel laureate and democracy campaigner who has become one of the leading figures of the protest movement, also on Tuesday called on Mubarak to resign.

The protesters were emboldened by an announcement from the military Monday night that it would not fire on protesters. The announcement was a serious blow to the authority of Mubarak, whose grip on power appears increasingly weak.

“Freedom of expression through peaceful means is guaranteed to everybody,” an army spokesman said.

During the recent protests in Tunisia, the country’s army similarly said it would not respond violently — a move that proved a pivotal point in the downfall of the authoritarian regime.

The government then announced it would be willing to negotiate with protesters.

A decision to not run in upcoming elections is unlikely to appease protesters who have for days said they would settle for nothing less than the immediate removal of Mubarak. On Tuesday afternoon, the largest banner in Tahrir Square, which is actually a circle, read in English, “People demand the removal of the regime.”

Aware that the whole world is watching the developments on the streets of Cairo, many of the signs bobbing up and down in the crowds of protesters were written in foreign languages. Many were written in English, but there were many also in French, Spanish and other languages.

Knowing that the military had effectively sided with the protesters, there was a sense of jubilation in Tahrir Square. Protesters played Egyptian drums and sang nationalist songs. Some protesters were even flying kites.

Resembling the wave at an American football game, chants of “get out,” a statement directed at Mubarak, rippled across the crowds as a military helicopter repeatedly flew around the square.

Another popular chant was directed at the president’s son, Gamal, who was believed to have been in line to take over for his 82-year-old father before he reportedly fled to London earlier in the week. It went, “Gamal, tell your father Egyptians hate him. Egypt is free, not for inheritance.”

Meanwhile, key opposition figures said Tuesday they wouldn’t sit down with the government for talks on key political and economic reforms until the embattled leader was gone, the LA Times reported.

“There can be dialogue but it has to come after the demands of the people are met and the first of those is that President Mubarak leaves,” Mohamed ElBaradei, the former UN official and Nobel laureate heading the emerging opposition force National Assn. for Change, told the Arabiya news network.

In Cairo, protesters climbed buildings and lampposts as they clamored to get a view of the massive crowd. The people gathered here seemed to come from all parts of Egypt and represented all classes and faiths. The rich chanted alongside the poor, Muslims alongside the secular.

Many protesters said that this was not just about the economy, but also about democracy and transparency. Karim Youssef, a wealthy Egyptian sporting his Yale sweatshirt, said he was there because he was tired of the corruption. It is not just about the poor and the unemployed, he said, it is about human rights.

“Being here is an obligation for all Egyptians,” Youssef said. “Basic democracy should be a right.”

Mohamed Fathy, a professor of medicine at university north of Cairo and a member of the Muslim Brotherhood, the country’s largest opposition movement, which has long been suppressed by the Mubarak government, said he was protesting because state security forces had repeatedly attempted to curb academic freedoms.

“I’m out here not for financial reasons but because this regime needs to go,” he said.

Although the protests were largely peaceful Tuesday, there was an underlying tension. Cairo residents, fearing shortages, stockpiled food and water. Bread, an important staple here, is increasingly difficult to find. And armed neighborhood watch groups operating mostly at night added to the sense that there was a growing power vacuum that could, at any time, explode.

Cairo residents said they were scared that a repeat of the violence that took place between police and protesters over the last few days could repeat itself if the police attempt to redeploy. There have been signs in some parts of the city that the police are reorganizing, making for a tense atmosphere.

A pro-Mubarak rally, attended by security forces, took place in front of the country’s foreign ministry building. Numbering in the hundreds, the Mubarak supporters appeared to be trying to goad the reform protesters into a fight. The small crowd could be seen hoisting high-ranking security officers on their shoulders, a clear attempt to antagonize the reformers.

The Egyptian army stood in between the two groups but several small skirmishes took place throughout the day.

At least 150 people have so far been killed and thousands more injured during clashes with government forces over the past week.

The military has been expanding its presence around Cairo. Metal barricades now surround Tahrir Square and troops have set up checkpoints around the city. There are more soldiers and tanks along sidewalks, and an increased troop presence outside government buildings. Egyptians have largely embraced the role of the army as the guarantor of their safety, as the police forces have all but vanished.

Meanwhile, foreign governments from Turkey to Germany to the United States organized evacuation flights for their citizens trapped inside Egypt’s smoldering capital.