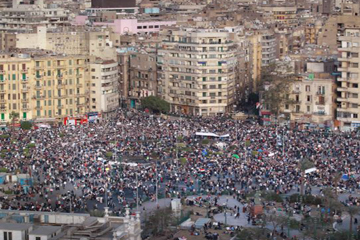 CAIRO, Egypt – In what could be a crucial shift against embattled Egyptian President Hosni Mubarak, the army announced it would not fire on protesters a day ahead of Tuesday’s planned million-man march in Cairo.

And for the first time Mubarak’s government has offered to negotiate with the opposition.

The opposition is mobilizing Egyptians to march from Cairo’s city center, Tahrir Square, to Mubarak’s residence.

An army spokesman said on state television that the military would not use force against Egyptians, who have taken to the streets to demand the ouster of the 82-year-old Mubarak. “Freedom of expression through peaceful means is guaranteed to everybody,” the army spokesman said.

During the recent protests in Tunisia, the country’s army similarly said it would not respond violently — a move that proved a pivotal point in the downfall of the authoritarian regime.

Newly appointed Vice President Omar Suleiman said on state TV Monday that Mubarak had asked him to look into constitutional and legislative reforms. But demonstrators remained firm in their demand that Mubarak must go.

“This is too little too late. One parliamentary election is not the point,” said Hussein Sakhawy, 27, who has applied for more than eight jobs in three years and been unable to find any work. “This isn’t just about one election. This was squarely about Mubarak.”

Tens of thousands gathered in Tahrir Square, or Liberation Square, on Monday in the seventh day of protests.

A 7-year-old boy, standing on his father’s shoulders, held a sign in Arabic that read, “I’m 7 years old and I hate you, you coward.” The poster was written as if it were a letter to the president, but rather than including a traditional signoff, it read: “Signed, the next generation.”

The military has been expanding its presence around Cairo. Metal barricades now surround Tahrir Square and troops have set up checkpoints around the city. There are more soldiers and tanks along sidewalks, and an increased troop presence outside government buildings. Egyptians have largely embraced the role of the army as the guarantor of their safety, as the police forces have all but vanished.

Meanwhile, foreign governments from Turkey to Germany to the United States organized evacuation flights for their citizens trapped inside Egypt’s smoldering capital.

Tahrir, or Liberation, Square, which until recently was a massive transit hub known for its gridlock and unheeded traffic lights, has now become a pedestrian area where thousands of Egyptians rally daily to demand freedom, democracy, and more opportunity in a stagnating economy.

Much of the blame and anger in the square was aimed directly at Mubarak, and his political moves did little to mollify protesting Egyptians eager to see fresh faces.

Egyptians said the suggestion of reforms was not enough to deter them from their quest to change the leadership of a government that has ruled them with little challenge for nearly three decades.

“We are so happy to be here. All Egyptians have risen to the occasion,” said Alia Essam, 27, one of the many female protesters in the square. “I hope — like many here hope — that these will be Mubarak’s last days in office.”

Despite the widespread frustration, the huge crowds in Tahrir Square have remained largely peaceful in their calls for regime change.

Just a few blocks away, however, violence over the weekend between protesters and police holdouts raised concern that there could be more turbulence when security forces return to work this week. Aggressive police action showed that they are a force different from the army.

Police clashed with hundreds of protesters outside the police force’s stronghold, the interior ministry, on Saturday. An area within a four-block radius of the ministry resembled a war zone, with police gunfire echoing as the two sides battled back and forth for control of the narrow streets leading to the building.

Protesters, armed with rocks, bottles and Molotov cocktails, made several attempts to capture the ministry, which they said symbolized a police force known for its corruption and impunity.

On Monday, the government announced it had appointed a new interior minister, naming Gen. Mahmoud Wagdy to the post. Wagdy formerly headed the Cairo criminal investigations department and also a former head of prisons.

The widespread riots and looting left many Cairenes eager for a return to order on the streets and many began to take control of their own neighborhoods, setting up road blocks and patrols by residents armed with sticks, clubs, knives and even guns.

These neighborhood watches seemed to be getting tenser on Monday, as people wondered where the police had gone.

“This is getting to be a tough job,” said Yasim Gadelhak, 26, a computer engineer. “Since I have to guard these posts, I’m not going to work. It’s time for someone else to take over.”

The sound of gunfire at night has been common throughout the capital over the past several days.

Cherif Barakat, who witnessed the violent clashes near the interior ministry, hid in his downtown apartment most of the weekend, scared to leave with a mob of looters roaming the streets. But echoing many other residents of Cairo, Barakat pointed out the obvious challenges Egypt’s security forces will face when they redeploy.

“I’ve been trembling with fear because of everything happening on this street,” said Barakat, referring to the fighting. “I think we’re all disgusted by the amount of looting going on now. Then again, how safe is it for us if the police are opening fire on our streets?”