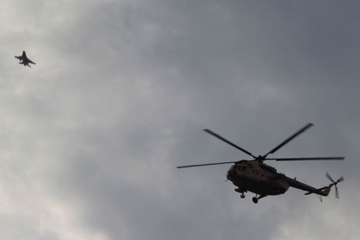 CAIRO, Egypt – Protesters in Cairo continued to control the streets for a sixth straight day on Sunday, demanding nothing less than for President Hosni Mubarak to step down. As Mubarak’s grip on power dwindles, however, concerns about what will happen next have begun to filter through the crowds.

The main opposition leader, Mohammad ElBaradei, joined hands with protesters in the main Tahrir Square Sunday evening and called on Mubarak to step down.

Meanwhile, foreign governments from Turkey to Germany to the United States have organized evacuation flights for their citizens trapped inside Cairo, Egypt’s burning capital.

Since the police lost control of the central and symbolic Liberation Square on Friday, they have largely disappeared from view. The charred remains of burnt police cars were scattered at protest sites on Saturday, and a few policemen were seen, but by and large the majority of them have fortified themselves at the Ministry of Interior. The country’s army meanwhile, appears to have stepped back, some even siding with the demonstrators.

As a result, residents have established a system of checkpoints around the city, in an effort to prevent widespread looting. These residents are armed with baseball bats – one hockey stick and a whip was also seen – as they try to prevent chaos from breaking out in Cairo.

Reports of prisoners having escaped from prisons, while unconfirmed, have raised the level of anxiety around the capital.

By midday on Saturday, there were thousands protesting at Liberation Square. Much of what was heard was the same general anger at Mubarak’s regime that has been heard all week.

Mubarak had tried to quell the riots by dismissing the cabinet and naming a new vice president on Saturday morning. But it did little good. It is Mubarak himself that Egyptians want to go. Already, several news agencies have confirmed, Mubarak’s family, including his son Gamal who many assumed was being groomed to succeed his father, has left the country.

“Mubarak, Mubarak, your plane is waiting to take you to Saudi,” people chanted, referring to the Tunisian president who fled there earlier in the month, also amid massive protests.

Adel Shaker, a 51-year-old, middle-class worker, said he was protesting for his son and grandson. “We are suffering so much from this government. They are thieves, so we want change. We want freedom. We want justice,” he said.

Abdel Salam, 50, said he and fellow Egyptians drew inspiration from Tunisia, but that they were fighting a battle all their own.

“Of course we were inspired by Tunisia, but we’ve been living under emergency law for 30 years. And Mubarak continues to ignore us,” he said on Saturday. He also said that the National Democratic Party, Mubarak’s party, tried to bribe him to forge votes during parliamentary elections in November. He was told he would be paid roughly nine dollars per 100 votes that he forged, and while he didn’t do it, he said that many did.

There was some anti-American sentiment, especially at the fact that the tear gas being fired into the crowd was American-produced. Many of the now ubiquitous empty shotgun casings strewn throught the streets of downtown Cairo read, “Made in the USA” on the bottom. Following Obama’s speech this week, many Egyptians vocalized the feeling that it was too little, too late from America. They wanted it to be their revolution, free of U.S. involvement.

In contrast to the police, the army appears to be getting along well with protesters. Soldiers came between protesters and police during at least one clash on Saturday, in a sign that the army was going to protect the people.

Eventually police retreated back to their base at the Ministry of Interior, where most police in Cairo have seemingly fortified themselves.

Around dusk, gunshots were heard near the Ministry of Interior, where nearly 500 protesters had gathered. Police had cordoned off the ministry and were firing in the direction of anyone who challenged them. Protesters used chains, broom sticks and threw Molotov cocktails in the direction of the police lines. There were dozens of injuries and reports of as any as five deaths.

The protesters were digging in deeper Saturday evening, focusing on the ministry as a symbol of their discontent. If they can take the building there is the sense that they will feel victorious.