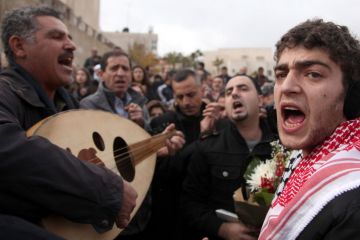 CAIRO, Egypt — An unemployed Algerian committed suicide by lighting himself on fire outside a government building in his North African country last week.

A few days later, and over a thousand miles away, thousands of Jordanians took to their streets to protest rising food prices.

Discontent among members of Egypt’s typically weak opposition led to chanting in Cairo this weekend, calling for President Hosni Mubarak – one of the longest serving leaders in the Middle East – to take the next flight out of the country.

And on Monday, an Egyptian also attempted, but reportedly failed, to kill himself by self-immolation near the parliament building in Cairo.

Events like these have become more common across the Arab world since the ouster of Tunisia’s former president, Zine al-Abidine Ben Ali, on Friday, following a month-long surge of unrest that intensified into a popular uprising across the tiny North African nation. Shock waves, albeit small in comparison, are still resonating in capital cities from Rabat to Cairo.

Anger and frustration over economic woes, from unemployment to the price of commodities such as sugar and bread, seems to be energizing opposition groups eager to promote financial and political reform across the Arab world.

In a region where some autocrats have remained in power for decades, often through the suppression of dissent by threat of force, there is no expectation of a domino-like toppling of power any time soon.

But the leaders of some Arab autocracies might be beginning to show signs of compromise. In the wake of Ben Ali’s surprise departure from Tunisia after 23 years of rule, they are more acutely aware, analysts said, that stability within their own regimes is no longer a guarantee.

“It’s clear that [discontent from Tunisia] is spreading. Opposition activists in the Arab world are trying to extend this into their own domestic contexts to take advantage of it, and use it in their own struggles,” said Shadi Hamid, director of research at Brookings Doha Center in Qatar. “Autocratic leaders in this region are probably pacing in their palaces, frightened. And they should be.”

Across North Africa, and as far into the Middle East as Jordan, governments have been scrambling to find solutions to economies plagued by stagnation, from unemployment to subsidies, to the cost of basic food items.

A January report issued by the United Nations Food and Agriculture Organization said that international costs of food staples like sugar and oil were now higher than pre-2008 levels – when rioting broke out in countries like Egypt over the cost of bread.

A local Algerian leader was dismissed this weekend following the self-immolation death of unemployed Mohsen Bouterfif in the eastern region of the country, according to the Reuters news agency.

Bouterfif’s suicide, as well as the attempted suicide in Egypt on Monday, was an apparent imitation of the death of Mohammed Bouazizi, the 26-year-old Tunisian fruit vendor whose act served as the catalyst for the recent uprising.

Egypt, perhaps eager to appease its own citizens, issued a statement supporting the will of the Tunisian people after Ben Ali’s departure.

“Egypt affirms its respect for the choices of the people in brotherly Tunisia as it trusts in the wisdom of its Tunisian brothers in fixing the situation and avoiding the collapse of Tunisia into chaos,” responded Egypt’s Foreign Ministry in a statement on Saturday.

Only the Libyan leader, Muammar Gaddafi, who has held power since leading a coup there in 1969, condemned the Tunisian protesters for inciting violence.

“What is this for? To change Zine al-Abidine? Hasn’t he told you he would step down after three years? Be patient for three years and your son stays alive,” said Gaddafi in a speech on Sunday, according to a Reuters report that cited Libya’s state media.

Still, Gaddafi’s government lowered import duties on basic foodstuffs last week, after rioting and looting in his own country took place in protest of the lack of adequate state-subsidized housing in some districts.

“I think we may be seeing an opening in the Arab world, economically at least. Many in the government circles are racing around, trying to fix this. There is definitely a fear in the air,” said Magdy Sobhy, an economist at the Egyptian state-funded Al-Ahram Center think tank. “Especially since many of Tunisia’s neighbors are worse off. Egypt is in many ways worse than Tunisia, at least economically speaking.”

The minimum wage in Egypt, the most populous nation in the Arab world with about 80 million people, is roughly $70 per month. Around a fifth of Egypt’s population lives on less than $2 per day, according to the United Nations.

Unemployment among youth in Egypt, many of whom have higher education degrees, is around 22 percent, according to 2009 government statistics.

Still, members of Mubarak’s ruling National Democratic Party wholeheartedly reject the idea that Egypt would ever experience widespread upheaval similar to that in Tunisia.

“The only danger of unrest spreading is if there is a strong linkage between economic and political crises occurring at the same time. Tunisia was a model of these two kinds of crises,” said Mostafa Elwi Saif, an National Democratic Party lawmaker. “Here, there has been much political reform in the past decade. Though we may need more, Tunisia cannot compare to Egypt at all.”

Opposition groups frequently criticize Egypt’s stringent electoral laws – many of which preserve the status quo by hampering competition before challengers even enter the ring.
An election for Egypt’s lower house of parliament late last year was marred by numerous allegations of vote-tampering and by widespread violence at the polls – including intimidation by the country’s vast security services.

Years of relative peace and stability in Egypt – what Mubarak’s regime often showcases as its success – comes partially at the cost of basic civil liberties, say local human rights groups.
Egyptians have been living under a draconian emergency law almost continuously since 1981, when Mubarak took office.

Presidential elections in Egypt are scheduled for this September, amid growing speculation over the health of 82-year-old Mubarak, who has never named a successor in his three decades of rule.

Many in Egypt believe Mubarak’s son Gamal is being groomed for the top post.

But with a reinvigorated opposition movement, in light of what some are already calling the ‘Jasmine Revolution’ in Tunisia, analysts say that Egypt will have to introduce at least some basic reforms before the country’s upcoming election.

“The main lesson here is that you can’t always anticipate revolutions. Autocracies may seem stable, but they aren’t,” said Hamid, the Brookings researcher. “If you talked to any Middle East analyst five weeks ago and told them that Tunisia would fall in a month, they would have laughed. Though a similar scenario may seem unlikely now in countries like Algeria and Egypt, it’s no longer unlikely.”