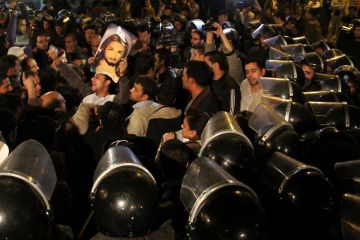 CAIRO, Egypt — Christmas in the slums of Manshiet Nasr was supposed to be the most wonderful time of the year for 19-year-old Mena Samy.

Samy and his fellow zabaleen, garbage collectors living in a predominantly Christian shantytown on the eastern edge of this city, usually adorn the otherwise squalid neighborhood with colorful lights, plastic replicas of Santa and nativity scenes in the days leading up to Coptic Christmas — which falls on Jan. 7 this year.

But in Samy’s household, Christmas is canceled this year.

In the wake of a deadly explosion outside a church in Alexandria earlier this week — an apparent suicide bombing that killed 23 people as worshippers exited a New Year’s Eve mass — Samy and his Coptic neighbors are finding little reason to be cheerful.

“What reason do we have to celebrate? We’re all still mourning. If people put up lights or decorations here, we will take them down,” Samy said. “This attack has shaken our entire community to the core.”

As Egypt’s minority Coptic Christian residents prepare for one of their largest religious celebrations of the year, most are still grieving the loss of life in Alexandria, and equally fearful that more violence will take place over the holiday.

Nationwide calls for calm and unity — including a televised speech by Egypt’s President Hosni Mubarak this week — have largely fallen flat. Violent clashes between Copts and security forces have erupted in neighborhoods throughout the country several times since the attack, raising concerns that Egypt could be headed for greater sectarian conflict.

Coptic communities across Europe are on alert also, after threats.

The impoverished residents of Manshiet Nasr, already economically segregated from much of Egyptian society, said the aftermath of the Jan. 1 bombing has pushed them further into isolation. Now facing what they call increased “persecution and discrimination” by the government, many of the zabaleen are directing their anger toward Mubarak’s 29-year-old regime.

“The government is not providing enough security outside churches,” said Salah Ateya, 75, a plastics recycler. “My wife is scared, my children are scared, and I’m scared. What kind of life are we living if we constantly feel the need to look over our shoulder outside church to see if people are going to blow us up?”

Egypt’s security forces have been on high alert since Saturday’s bombing and in much of the country the police presence and buffer zones surrounding Coptic churches have been drastically increased.

But outside the small Saint Simon the Tanner church in Manshiet Nasr, a lone police officer slouched snoozing in his chair, seemingly even unaware of the dozens of goats running around the alley near the main gate.

Residents in Manshiet Nasr noted that security was supposed to have already been heightened following a warning to the Coptic Church late last year from an Al Qaeda group in Iraq — presumed by many to be the “foreign elements” Egypt’s interior ministry initially blamed for the attack.

“We are angry at extremism but more angry at the government. We know that extremists don’t represent the majority of Muslims,” said Nagafa Rasmy, an artificial Christmas tree vendor who also added that her sales figures were only average this year. “The holiday is coming, and I just hope that nothing more happens.”

The concern for Egypt’s government — eager to maintain security in the Middle East’s most populous nation — is that the Copts’ worries will continue to spill out onto the street.

Hundreds of protesters — Copts as well as Muslims standing in solidarity — lobbed rocks and glass bottles at security forces during a demonstration march along Cairo’s main Nile River road on Sunday.

Police forces responded by tossing the same debris back at them, according to local media.

On Monday, local video reports showed security beating several protesters with batons after an attempt was made to push through a cordon of black-clad riot troops during a small rally in a northern Cairo suburb.

Pope Shenouda, the leader of Egypt’s Coptic Church, has appealed for calm in the wake of recent “panic” to prevent more unrest.

Egypt’s president also urged his citizens of all faiths to unite.

“Wicked terrorists targeted the nation, Copts and Muslims,” said Mubarak, in a televised appearance on state television in the hours immediately following the Alexandria bombing, according to the Reuters news agency.

Sectarian violence between Muslims and the minority Coptic Christians — which constitute about 10 percent of the country’s nearly 80 million residents — is generally rare.

Tension has turned violent in the past, however, typically over local disputes involving conversion, marriage and the laws regarding the construction of new churches.

Last year on Christmas Day, seven Copts were killed in a drive-by shooting outside a church in Upper Egypt.

Father Samaan Ibrahim, 69, the head priest at a massive, cave-like monastery cut into the base of the Mokattam cliffs near Manshiet Nasr, called the Alexandria bombing the most violent incident he had ever heard of in Egypt.

“Our national identification cards carry our religion on them, which is discrimination. I blame the state — the government talks a lot about unity, but nothing is actually done in practice,” Ibrahim said.

Echoing many in Manshiet Nasr, he believed that tension is only worsening.

Kamille Shenouda runs a small bakery along the main, unpaved road leading into the community of zabaleen. Christmastime for Shenouda usually means a storefront packed with families ordering trays of kahk, a sugar-topped cookie popular as a dessert for the holiday feast.

This year, however, his bakery is empty.

“I think people are scared and confused,” he said. “With the separation of understanding between our two faiths only getting wider, this is going to be a very difficult Christmas.”