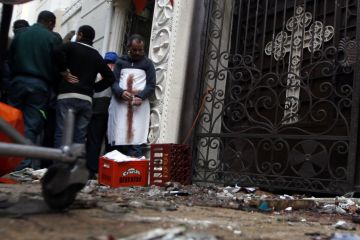 ALEXANDRIA, Egypt — Tensions remained high at the scene of a rare suicide bomb attack in Alexandria Saturday, amid worries that further sectarian clashes would erupt in Egypt’s second largest city.

Twenty-one people were killed and scores injured by an explosion outside the All Saints Church, as worshippers were exiting a New Year’s Eve mass.

A charred, bloodstained chassis of a car — initially thought to be the source of the explosion — was the most visible, but not the only, reminder that a massive explosion had occurred just after midnight this morning.

Many hours after the majority of the wreckage had been cleared, the walls of the church remained splotched by blood and small chunks of human flesh.

Congregation members wept as they swept rubble, the remains of burned clothing, and shattered religious icons from the floor.

The narrow street outside the church was still littered with shards of glass and blackened debris, remnants of a blast strong enough to blow out the windshields in several vehicles that were parked as far as 50 feet away.

“It was a very loud explosion, much more massive than the loudest fireworks I’ve ever heard,” said Maher Zaki, 46, who was inside the building at the time.

Throughout the day, thick lines of black-clad Egyptian riot police cordoned off hundreds of angry onlookers from the blast zone, following clashes between churchgoers and security forces in the early hours after the attack.

Several congregation members also threw rocks at a nearby mosque, according to local news reports.

Sectarian violence between Egypt’s Muslim majority and its Coptic Christians — roughly 10 percent of the country’s nearly 80 million residents — is rare.

Sporadic outbreaks of violence, however, have occurred recently over issues of conversion, marriage, and stringent laws limiting the construction of new churches in Egypt.

Egypt’s government, which consistently denies any sectarian tension in the country, blamed “foreign elements” for the planning and execution of the suicide bombing, according to a statement issued by the Ministry of Interior.

No one has claimed credit for today’s attack.

Security outside the country’s churches had been heightened for weeks, following a threat late last year to Egypt’s Coptic Christian Church by an Iraq-based Al Qaeda group.

Members of the All Saints Church were wary to place blame before uncovering more facts, for fear of inciting more sectarian tension.

“I can speculate, but we don’t yet know enough about what happened. But of course, this was very tough for us. There were many children killed,” Zaki said. “We came here as families to spend the New Year with God. But many of us left with our family members dead.”