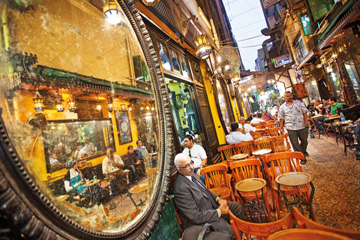 CAIRO, Egypt — The cacophonous din begins well before sunrise, with the early morning Islamic call to prayer blaring overhead from each of the city’s 4,000 mosques. By midday, throngs of pedestrians negotiate narrow streets already clogged with cars, three-wheeled tuk-tuks (motorised rickshaws) and enterprising street vendors. After sunset, brightly-lit party boats blasting Arabic pop music ferry dancing revellers up and down the Nile River into the wee hours of the morning.

And that’s a quiet day for Cairo.

Welcome to Egypt’s capital, the largest city in the African continent with over 5,000 years of Pharaonic and Islamic history. For centuries, tourists have flocked to ancient sites like the pyramids at Giza or Saqqara, headed to the Egyptian Museum to catch a peek of King Tutankhamun’s golden burial mask, and hiked up to the imposing Muhammad Ali mosque in the Citadel.

Cairo, however, is much more than a window to history. The modern and ancient worlds collide in the cosmopolitan city where malls and towering skyscrapers sit alongside 14th century Fatimid mosques, and donkey carts jostle for road space with sports cars; and where the famous Sphinx rests across the street from an American fast-food chain.

This obvious dichotomy is just one sign that Cairo is embracing its rapid move into the modern world. Years of renovations to historical landmarks have kept pace with the ever-evolving Cairene culture, which now boasts a thriving arts and music scene, vibrant nightlife, international cuisine and luxury hotels.

“Most tourists come just to see the pyramids. But they’ll definitely miss out if they don’t see the modern town,” says Smiley Roushdi of Cairo 360 (cairo360.com), an online guide to the city. “The options here – from art galleries to Oriental dance performances, and excellent nightlife – are expanding rapidly.”

The cosmetic changes in Islamic Cairo, one of the city’s oldest quarters, are a clear sign the Egyptian capital is committed to moving forward even as it works to preserve its past.

A decade of restoration work on the famous Muizz al-Din Street that runs through the heart of Islamic Cairo has cleared away decades of wear from dozens of once-crumbling landmarks. Now closed to traffic, the bustling alleyway has been transformed into a veritable open-air museum housing centuries of history of the Fatimid, Mameluke and Ottoman empires, who ruled Cairo variously over a period of eight centuries. By night, state-of-the-art lighting illuminate Muizz al-Din Street’s mosques and mausoleums, a reminder of Cairo’s reputation as the City of 1,000 Minarets.

At the southern end of Muizz al-Din Street sits the impressive Bab Zuweila, the 900-year-old mediaeval gate that was part of the Fatimid fortifications. Restored in 2001, it rests below twin minarets from which you can see some of the most sweeping views of the surrounding area. Venture farther north and you’ll find al-Azhar, the most famous mosque in Egypt that’s also home to a university that was founded in AD970.

A must-see attraction in Islamic Cairo is the Khan el-Khalili bazaar, a bustling market dating back to the 14th century that’s famous for its spices, gold and copper. Get lost in the maze-like alleys of perfume shops and stalls of touristy trinkets. If the hassle of over-eager vendors gets too overwhelming, take a break at El Fishawy, a coffeeshop that’s been open every day for the last 200 years, says its manager. Relax with its house speciality, fresh mint tea, or try the cardamom-infused Turkish coffee if you need a caffeine boost.

Amid the history of the ancient Khan el-Khalili marketplace, you’ll find the trendy Egyptian-Indian fusion restaurant Taj al-Sultan (tajalsultan.com). Housed within a centuries-old building, it has a rooftop terrace that overlooks the bustling Al-Hussein mosque square. The three-level eatery is famous for mezze (a selection of small dishes), such as hummus, baba ghanouj (mashed eggplant mixed with various seasonings) and stuffed vine leaves.

From its boutique art galleries to international film festivals, Cairo is emerging as a centre of modern culture with a booming independent arts scene. Most of the action takes place in Zamalek, an island in the Nile that lies between downtown Cairo and Giza. The upscale tree-lined neighbourhood is renowned for its luxury and designer shops and has excellent Western-style restaurants on every street.

“Zamalek is where you’ll find the hottest art galleries and designer shopping as it’s centrally located and has the most pedestrian traffic among Cairo’s neighbourhoods,” says Heba ElKayal, lifestyle editor at a local English-language daily.

Zamalek has as many independent art galleries as Egypt has pyramids. One of the more established is Safar Khan Gallery (safarkhan.com), known for its contemporary works by established Egyptian artists. Located next door is the city’s only speciality cupcake bakery Nola (nolabakery.com), whose lovely smells will tempt you before you even set foot in the shop.

While in Cairo, be sure to take in a musical or ballet at the Cairo Opera House (cairoopera.org). Restored in 1988, the main performing arts venue in the Egyptian capital is sited on what used to be the Royal Opera House, which burned down in 1971. Or catch a performance of Verdi’s much-loved opera Aida, the tragic tale of star-crossed lovers inspired by Pharaonic history.

The opera house also plays host to the Cairo International Film Festival (www.cairofilmfest.org). The annual, year-end affair draws celebrities from all over the world in a celebration of Middle Eastern and foreign cinematic works. Nearby, the El-Sawy Culturewheel (culturewheel.com) hosts young, creative types under the May 15th Bridge. Here, live music plays daily, from heavy metal to the Oriental oud guitar. The El-Sawy Culturewheel also plays host to the annual Cairo Jazz Festival (cairojazzfest.com).

To retreat from the sprawling megacity’s crowds, traffic and noise, Cairenes are known to get out of Cairo as often as they can. But a few newly-designed spots within city limits now make it possible to escape the hubbub without leaving town.

Offering a spot of serenity is the lush Al-Azhar Park (Salah Salem Road, El Darassa, Tel: 20 2 2510 7378). With its panoramic view of the Islamic quarter, the hilly 30ha summit of trees and grassy knolls is the perfect site for a weekend picnic. Or chill out at the cafes and restaurants there, after which you could visit the 800-year-old Ayyubid wall, part of which has been restored. The imposing wall, built in the 12th century AD by Saladin, the first Ayyubid Sultan of Egypt and Syria, was designed to protect the city against the Crusaders.

Another way to retreat from the madding crowd is to watch the spectacular sunset in Cairo. The best spot to catch the bright bursts of red and orange on the skyline is at Mokattam cliff, which offers sweeping views of the city. Just 20 minutes from downtown, you could hire one of the spanking new cabs (which now come with air-conditioning and fully-functioning meters) to get you there.

Otherwise, take in the panorama from Egypt’s tallest building, Cairo Tower in Zamalek (cairotower.net). Rising to 187m, the lotus-inspired skyscraper soars higher than even the Great Pyramid. From the observation deck, it feels like you’re standing on top of the downtown area, away from the stress, noise and heat of the city below. And following a refurbishment in 2009, the building has seen some dramatic transformations to its revolving restaurant, along with the addition of a VIP lounge.

After dark, people flock to Cairo’s world-class dining venues, trendy bars and all-night dance clubs. “Beyond the iconic images of Egypt, Cairo also boasts a vibrant nightlife that tourists often overlook,” says Amy Mowafi, managing editor of lifestyle magazine Enigma. “What’s especially exciting is the eagerness of the new generation of restaurateurs and club owners to meld the best of East and West, and the exoticism of old-school Cairo with cosmopolitan chic.”

While Cairenes may argue that the best food is found in the Egyptian home, the upscale Arabesque (6 Kasr El Nil Street, Tel: 20 2 2574 8677) proves otherwise. Its moulekhaya, a rich and savoury Egyptian soup, served with chicken and rice, is among the best in the country. After dinner, don’t be surprised when the hip crowd starts twirling to the music – even though there’s no dance floor here. Another stylish eatery is Sequoia (sequoiaonline.net), where fashionistas dine on Mediterranean cuisine while taking in sweeping views of the River Nile.

After dinner, head to Tamarai (tamarai-egypt.com), where Cairo’s young and beautiful converge to see and be seen. Sit, mingle and nibble on finger foods on the outdoor terrace or dance the night away indoors. Despite the city’s relatively conservative culture, short skirts and low necklines rule at Tamarai. For a more laid-back experience, Cairo Jazz Club (cairojazzclub.com) is an ideal place to enjoy live Oriental jazz-fusion music among a hipster crowd.

Cairo has hosted tourists for centuries, but there’s nothing antiquated about the luxury hotels dotting the banks of the Nile. In fact, a surge of new and recently renovated hotels make for endless options in world-class accommodation.

The Fairmont Nile City (fairmont.com/nilecity) is one of the newest additions to Cairo’s five-star club. Located between the landmark twin Nile City Towers along the Nile River, it’s the perfect launch pad for any local expedition. Then again, you may not want to leave your hotel room, which is replete with elegant Art Deco elements, soft ambient lighting and stunning views of the Nile or the city. There’s even a shopping mall with a cinema within the hotel complex, so you’ll never want for things to do.

If you get hungry, the California-themed Napa Grill on the second floor dishes up some of the most mouthwatering and inventive burgers in town using ingredients like truffle oil, foie gras and blue cheese.

A short distance away on the eastern bank of the Nile River, the Kempinski Nile Hotel (www.kempinski.com/en/cairo) features minimalist decor fusing European flair with reminders of Egypt’s Pharaonic past. With just 137 rooms, the luxury boutique hotel provides intimacy amid the chaos of Cairo. Have a mug of cocoa at the hotel’s Chocolate Lounge, or test the chef at The Blue – a restaurant so confident in its ability to please your palate that it has no menu; the chef dishes up tailor-made meals on request.

Far from the downtown bustle is the newly refurbished Zamalek Residence Cairo hotel (21 Mohamed Mazhar Street, Zamalek, Tel: 20 2 2737 0055). Unwind at the idyllic hotel by enjoying a cool dip in its pristine swimming pool, from where you have a clear view of the Nile River and fishermen hauling in the day’s catch.

In Cairo, you can live in the lap of luxury and enjoy the modern culture of a city that once ruled an ancient civilisation. And while designer stores, five-star dining, trendy nightspots and luxury hotels now figure prominently, the past is still very much alive in Cairo’s modern world.