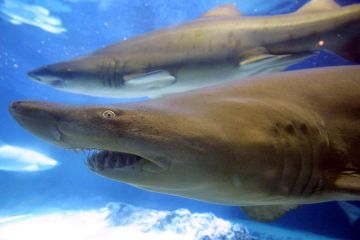 SHARM EL-SHEIKH, Egypt — The balmy winter morning started like every other for Foad el-Gharib — with a quick dip in the warm, turquoise-blue water of the Red Sea outside his resort home in Coral Bay.

But something did not seem right.

Just before diving into the water, Foad heard muffled cries coming from a female in the distance. Looking up, he noticed a snorkeler flailing about helplessly along the reef wall.

She was 50 feet away and wore clouded goggles, but Foad could still see the panic in the woman’s eyes. In a split second, she disappeared underwater. By the time she surfaced, screaming, the water around her was blood red. Waving for help, a single bone dangled from where her hand had once been attached to her arm.

That’s when Foad caught a glimpse of her predator.

“A grey, medium-sized shark was swimming right next to the woman. And her hand was in the shark’s mouth,” the middle-aged businessman said. “Everyone on the beach was shocked when we started screaming ‘shark!’ Then people just got hysterical when they saw the woman’s mangled body. I’ve been a diver for 20 years, but this was very, very scary.”

It was the first shark attack on a swimmer in Sharm el-Sheikh in more than a year.

The rare incident, however, would not be the last — nor would it be the worst.

In less than a week, five separate attacks on foreign snorkelers and swimmers in Sharm — Egypt’s most popular beach destination — has created a palpable sense of fear among tourists in the southern Sinai Peninsula.

The gruesome attacks are so uncommon that even experts and authorities are bewildered — one local leader even bizarrely asserted that Israel’s spy agency could have planted the shark in Egypt’s waters.

But beyond the dangers that lie beneath the water, it’s an increasing hysteria on dry land among tourists and local businesses in Sharm, where millions of tourist dollars are spent each year, which authorities are trying so desperately to contain.

“There’s absolutely no way I’m going in the water now. I’m way too scared,” said Lisa, 28, who came to Sharm el-Sheikh from Manchester, England for a scuba diving vacation with her boyfriend Ryan. “We were just swimming in the same area as the last victim — that could have been us.”

The nerves in Sharm first started rattling less than a week ago, when the string of shark attacks began.

On Dec. 1, two Russian women were severely injured from shark bites while snorkeling north of the main beaches in Sharm. The next day, a Ukrainian man and another Russian tourist suffered minor injuries resulting from shark bites, said Mohamed Dahe, the general manager of the local hospital.

Boats and divers were sent on a hunt to find the killer — an oceanic white tip shark, according to officials and witnesses.

Forty-eight hours later, two sharks had been captured and killed. An autopsy proved that one of the two had been behind the attacks, according to authorities.

Beaches were reopened the following day, but the predator struck again.

This time, the victim, a 71-year-old German woman, was killed after being mauled in the legs.

Shark attacks in Sharm, like elsewhere in the world, are extremely rare.

Only six unprovoked incidents — not including the most recent five — have been recorded in Egypt’s Red Sea in the past decade, according to the International Shark Attack File at the Florida Museum of Natural History.

Tourists walk on the beach near the site in the Red Sea resort of Sharm el-Sheikh on Dec. 6, 2010, where a shark mauled to death a German tourist.

This week, Sharm’s beaches, restaurants, and nightclubs were packed with foreign tourists waiting for an official explanation for the numerous shark attacks.

Authorities, for their part, appear baffled by the change in shark migratory patterns.

Several theories have been floated, from over-fishing to the illegal dumping of sheep carcasses from passing vessels, which might be causing a feeding frenzy in the Red Sea.

The oddest attempt may have come from the region’s governor, Abdel-Fadeel Shosha, who recently said on state television that Israel’s Mossad could have planted GPS-controlled sharks in Egypt’s waters, according to the online portal of the government-funded Al-Ahram newspaper.

A team of American and Australian shark experts have been dispatched to Sharm to aid in the search for more conclusive answers.

The sudden increase in frequency is putting a pinch on local business, as Sharm’s beaches are once again closed to most activities pending further investigation.

Van Lysebettens said that his dive shop could soon start losing half its daily average of 100 customers, forcing layoffs of instructors and other employees.

“It’s been a sobering moment, for sure. The scare in our industry is pretty healthy right now,” he said.
Egypt’s economy is heavily dependent on the tourism industry, which generates more than $10 billion in revenue each year.

A wave of terrorist bombings targeting tourist sites and hotels throughout the Sinai Peninsula between 2004 and 2006 greatly impacted the numbers of foreigners coming to the region.

But Ahmed Salah, a spokesman for the South Sinai region, was quick to dispel the notion that a string of shark attacks could create the same kind of panic.

“These types of attacks are very rare for Sharm and Egypt. And we are not alone — this could happen anywhere, in America, Australia and South Africa,” Salah said. “I don’t think this problem will last in Sharm. Even if it did, diving is not the only activity for tourists. They use the beaches to sunbathe and they are still enjoying themselves.”

Although nothing is known about the shark — or sharks — causing the stir in Sharm, most businesses here agree that the economy will soon be in troubled waters if no answers are found.

Hesham Mahmoud, the manager of Helnan Marina Sharm, a cliff-top hotel overlooking the popular Na’ama Bay, said that many residents are “losing confidence” in the ability of the Egyptian authorities to solve the problem.

“I’m telling my guests not to panic, but the whole shark situation is pretty worrying for me,” Mahmoud said. “If things don’t change soon, our business will be very affected. I think many hotel managers in Sharm are equally worried.”