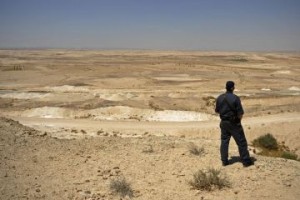 CAIRO, Egypt — As Egypt assumed its year-long chairmanship of the United Nations High Commissioner for Refugees executive committee in Geneva last month, its policy of shooting unarmed migrants along its “death zone” border with Israel has come into stark relief.

Last week a Sudanese man was shot and killed by Egyptian security guards as he attempted to sneak through a portion of the 160-mile barbed wire fence running through the barren Sinai desert. At least 25 African migrants have been killed this year alone, adding to the scores since 2007.

Ali Daher is one of those willing to take the risk in exchange for a better life.

After all, the 29-year-old has already escaped death once by fleeing to Egypt from the violence in his native Somalia. But after waiting for resettlement elsewhere for nearly six years in his overcrowded apartment in a Cairo slum, Daher is increasingly frustrated and forlorn. As a refugee, he can’t work and has little access to health care. Now, Daher said he has little choice but to chance a crossing.

“If I had the money to hire a smuggler to help me across the border, I would do it. I’m not scared of bullets,” he said. “At least there would be a future for me in Israel. I’d rather die than go crazy waiting here.”

Daher is one of nearly 40,000 officially recognized asylum seekers and refugees using Egypt as a transit nation because of its relative security and proximity to war-torn countries like Sudan, Somalia and Iraq.

The likelihood of long-term solutions for many of them in Egypt, however, is bleak. Although asylum seekers and refugees are entitled to protection by the UNHCR, those rights in Egypt are frequently denied. And with a local U.N. refugee agency itself stressed by large numbers of applicants, many are forced to remain waiting in limbo, with little hope to leave.

Egypt has no domestic legislation or official institutions for processing refugees. All responsibility for documenting and determining the status of asylum seekers in Egypt has been delegated to the UNHCR, under the provisions of the 1951 Convention relating to the status of refugees.

Egypt is a signatory member to the convention, as well as its subsequent protocols, but made reservations to several articles along mostly financial lines.

The result is that the vast majority of refugees in Egypt are heavily dependent upon stipends from the UNHCR, charitable giving from nongovernmental organizations, and are largely unable to earn a decent livelihood, according to Michael Kagan, a former director of the Africa Middle East Refugee Assistance organization in Egypt.

Asylum seekers are largely unable to obtain work permits and are forced into the informal sector — cleaning houses or peddling items illegally on Cairo’s streets. Access to public health care and free government education at the higher levels is also unavailable for most.

“At best, the refugee system in Egypt offers someone minimal safety on the first day of their escape. Then on day two and day three, there is nothing for them,” Kagan said. “People spend indefinite periods of time in very difficult slums. There’s no future for them. It could be survivable, in the sense that you could keep a human being alive. But the mental suffering for refugees can be quite extreme.”

Occasionally, asylum seekers are detained before being allowed to access the UNHCR.

In 2008, over one thousand Eritrean asylum seekers in Egypt were forcibly returned home, subsequently detained and placed at “grave risk of torture and other ill-treatment,” according to a 2009 report by Amnesty International.

Now, with Egypt’s ascension to the top post of UNHCR’s governing body in Geneva, criticism has been renewed over its unofficial policy of shooting unarmed migrants along the Israeli border.

“To be consistent with its position as the executive committee’s new chair, Egypt needs to put its own house in order,” said Joe Stork, deputy Middle East and North Africa director at Human Rights Watch, in a recent statement.

The Egyptian government, for its part, calls criticism of their Sinai border policies “unfair,” citing the deaths of 14 of their own security guards following clashes with migrants who “illegally enter the militarized border zone.”

Egypt denies that it has a “shoot-to-kill” policy along the Israeli border. Security guards are instructed to fire several warning shots into the air, according to Laila Bahaa El-Din, the deputy assistant minister for human rights at Egypt’s Ministry of Foreign Affairs.

“The criticism of our policies regarding migrants and refugees is completely one-sided,” she said. “On the contrary, we are trying to help and accommodate as many refugees in Egypt as possible. Despite our own high unemployment at home, we have opened the doors to many refugees. We are doing more than most.”

For many refugees living in Egypt, much of the frustration is directed at the local UNHCR office.

Many have denounced the UNHCR for having lengthy wait times for refugee status determination procedures — in some cases as long as a decade — with little transparency to stakeholders.

In a sign of rising tension, refugees have started to demonstrate outside the UNHCR office in a Cairo suburb.

Ahmed Nour, 35, a Somali living in Cairo, said he would protest until his situation changes. After waiting nearly a decade, jobless in Egypt, Nour now says his dreams of moving to America are fading.

“This is not about the Egyptian government — it’s about UNHCR. I have not gotten any assistance from them,” Nour said. “They told me that they would call me since 2002, and I’m still waiting. I don’t feel like I have any rights as a refugee.”

The preferred UNHCR solution for refugees — voluntary repatriation — is often unlikely because of the lack of safety or prolonged conflicts in many of the refugees’ home countries.

Mohamed Dayri, the regional representative for the UNHCR, admitted that his agency faced many challenges in Egypt. Understaffing, difficulties in the local integration of refugees, and limited slots for resettlement to third countries are shortcomings the U.N. is working to fix, he said.

“The reality is less than what we want it to be,” Dayri said. “But Egypt comprises a population of 80 million Egyptians, and countries do have limitations. This situation presents itself with challenges for asylum seekers, refugees, and us. And we are very pleased and hopeful with Egypt’s chairmanship of the UNHCR executive committee.”

Dayri points out that although relocation to third countries is not a right, his office plans to refer at least 900 refugees for resettlement outside of Egypt this year.

Critics, however, argue that there are far more refugees in Cairo than officially counted by the UNHCR — perhaps upward of 600,000 — making Egypt’s capital one of the largest urban centers for asylum seekers in the world.

“Many of these are people who have been unfairly rejected by UNHCR for its mandate status and cannot return home,” said Barbara Harrell-Bond, the founder and former director of the Center for Refugee Studies at the University of Oxford. “Others do not register because of fear or because they believe UNHCR is hopeless.”

Hopelessness is precisely what drives increasing numbers of refugees to consider a path to Israel fraught with peril.

Illegally migrating to Israel costs between $1,000 and $2,000 to hire a smuggler, said Fatima Idris, head of Tadamon, a nonprofit educational organization for refugees in Cairo.

The risk of getting shot along the Sinai border is too high for Tarig Eldaw, 39, a refugee from the Darfur region of Sudan.

Eldaw fled government persecution, imprisonment and torture in Sudan to Egypt nearly three years ago. With a monthly salary of around $130 per month, he considers himself one of the lucky ones.

Still, after three years of waiting for the UNHCR to assist with resettlement, Eldaw has little hope that he, his wife and son will ever make it out of Cairo.

“It’s so sad. The waiting here feels like I’m in prison again, and I’ve lost all ambition,” Eldaw said. “But I would never take the risk [of going to Israel] with my wife and son. Perhaps if I was single, I would probably think about it more.”