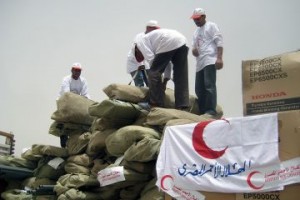 Since the May 31 raid, international pressure has mounted on Israel and Egypt to ease the three-year blockade on the Gaza Strip, prompting Cairo’s move Tuesday to open the border to Palestinians seeking medical treatment.

High-ranking security officials inside the Rafah border terminal said that more than 500 Palestinians had been allowed to enter Egypt on Wednesday.

The land and sea blockade on Gaza was imposed by Israel in 2007, after the violent takeover of the strip from the Palestinian Authority by Hamas, an Islamic resistance group that had once vowed to “wipe Israel off the map.”

For its part, Egypt has also largely kept the Rafah border crossing sealed, except for the most serious humanitarian cases.

Egypt is one of the largest recipients of American foreign aid, totaling close to $2 billion annually, in part because of its 1979 peace treaty with Israel.

Historically, Egypt has also struggled against Islamic militancy and has seen Hamas, a movement that grew out of the Egyptian Muslim Brotherhood, as something to fear.

But international outrage over the deadly raid on the aid flotilla, which killed nine people including an American citizen of Turkish origin, is testing the Egypt-Israel partnership.

Israeli Prime Minister Benjamin Netanyahu had rejected international criticism over his country’s continued blockade on Gaza, reportedly saying that without it, Iran would establish a ”port” in Gaza for weapons shipments.

Meanwhile, protests continued in Turkey on Thursday. All nine of those killed in the May 31 raids were Turkish, one a dual U.S. citizen, traveling aboard the cruise liner Mavi Marmara. Turkey withdrew its ambassador from Tel Aviv immediately after the raid.

The Israeli Defense Forces defended their actions, and a video allegedly showing those aboard the ship attacking Israeli commandos and throwing one overboard has been released on YouTube.

Earlier this week, downtown Cairo was also rocked by several protests against the blockade of Gaza. The demonstrations saw more than 1,000 Egyptians hurling insults at Mubarak and his government.

Egypt’s Foreign Ministry called the flotilla killings “tragic,” criticizing the “unjust Israeli siege on the Gaza Strip.” But even as the Foreign Ministry’s press statement was released, Egyptian opposition groups had rallied outside the building, denouncing Egypt’s complicity in the blockade while screaming “Down with Mubarak.”

“Until this week, the Egyptian government had been trying to downplay their role in the blockade, especially in the Arab world,” said Diaa Rashwan, an expert at the Al-Ahram Center for Political and Strategic Studies, a government-funded think tank. “But after the Israeli flotilla affair, now I think there is a real change in the Egyptian strategy.”

Rafah’s border crossing, normally a sleepy, desolate stretch of sand, has been bustling with activity both inside and out, with eager travelers filling the terminal’s arrival and departure halls, and trucks laden with aid supplies lining up for entry into Gaza.

Still, several Gazans coming into Egypt claimed that there were still thousands of sick Palestinians on the other side waiting to cross; one estimate was as high as 8,000.

Egyptian security officials at Rafah placed the blame squarely on Gaza’s Hamas-led government, saying that too many people were coming through without proper documentation, including a letter from their Ministry of Health stating the medical condition and required treatment.

Not just any Gazan can cross the border into Egypt. Even those carrying normally adequate travel documentation were denied entry.

Mohamed Abdel Rahman El Deremlee, 75, rolling through the border terminal in a makeshift wheelchair, came to Egypt to have an operation on his broken hip and leg. When his son Hazem, pushing the wheelchair, was turned away, he broke down.

“Of course I’m angry. Angry with Egypt, with Hamas, with Israel,” he said, shedding tears. “Why can’t the border just be opened for good?”

Aid supplies appear to be trickling into Gaza only at a snail’s pace.

On Thursday, two flatbed trucks bound for Gaza carrying 250 family-sized tents and almost 30 generators went into the border terminal only to sit, waiting for coordination and approval on both sides of the border.

Omar Ali Mohamed, the regional Sinai coordinator for the Egyptian Red Crescent, said that as many as 25 additional trucks carrying flour, rice, sugar and canned meat were en route.

Gazans stranded on the Egyptian side, in some cases for weeks, have also gained permission to head home, most carrying dozens of boxes of newly bought household appliances and electronics, items banned by the blockade.

Many Palestinians at the border wondered how long the terminal will stay open, and more than a few Gazans here believed the move was merely a publicity stunt to appease critics of Egypt, and that Cairo will close the gates within weeks.

Omar El-Shawa, 28, flew to Egypt from China, where he works as an engineer, the minute he heard news about the opening. El-Shawa hasn’t seen his parents in more than three years. The risk of not getting back out of Gaza is well worth the price of seeing his mother and father, he said.

“I am sure Egypt opened Rafah for political reasons,” he said. “They may close it within days, but it’s worth it for me to finally see my family.”