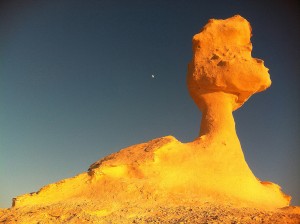 BAWATI, Egypt — The windswept peak of Black Mountain could be the perfect place to watch a sunset. Normally quiet and isolated from the rest of the world, the narrow ridge overlooks Bahariya Oasis, a lush depression of palm trees in the middle of Egypt’s remote Western Desert.

But everyday, minutes before the sun dips below the horizon, buses and SUVs packed with foreign tourists climb the barren rocks of the mountain. The tranquility is disrupted into a loud jumble of languages, as tourists snap photos and toss rocks off the cliff, before hurtling off to the next stop on their guided oasis tour.

Ecotourism is taking off throughout Egypt, boosting an economy already heavily dependent on tourism revenue. Bahariya is among those destinations increasingly popular for their pristine natural environment.

However, Egypt is quickly learning the need for balance between environment and  development, amid concerns that tourism is stressing the country’s fragile ecosystems to the point of collapse.

And the debate on ecotourism is even being had here, on the dusty streets of Bahariya’s largest village.

Ali Abdel Salem, 58, has lived in Bawati all his life. He has fond memories of the days before an asphalt highway was built linking the oasis to Cairo.

A trip from the capital that once took five days now takes only five hours.

Bahariya Oasis, once a thriving agricultural center for the Roman Empire, is now the preferred stepping-stone and supply stop for tourists heading to the surrounding deserts. Newly discovered ancient temples set against a stunning natural backdrop is another reason tourism is increasing here.

In recent years, the number of visitors to Bahariya has climbed so high that one-third of the oasis’ almost 40,000 residents are now working in tourism. Over the past decade, unemployment decreased as the number of hotels in Bahariya shot up 500 percent, according to Bahariya’s tourism office.

“Bahariya may be changing, but we need even more tourists if we will survive,” said Assam Tawkif, a tailor who sells tents, cushions, and sleeping bags to local safari companies.

“The government should be promoting Bahariya to get even more people here,” said Tawkif.

Though most of Egypt’s 11 million foreign visitors head straight for the ancient monuments and Red Sea beaches, nearly 10 percent come for the deserts and oases, according Egypt’s Ministry of Tourism.

Eco-lodges have emerged throughout Egypt as a green solution to offset the high number of vacationers.

Tamer El Sayed developed Bahariya’s first eco-lodge in 2005: Qasr el Bawity, a plush 34-room hotel carved into a high ridge on the outskirts of Bawati. The hotel was built entirely of local materials, employs a local Bedouin staff, and separates and treats waste into fertilizer for palm trees in the oasis.

But eco-conscious or not, El Sayed worries that encouraging more visitors to the region will only leave a larger footprint on the natural environment.

Nowhere is the potential for damage more evident than the White Desert, a short drive south of Bahariya. The lunar-like landscape of the White Desert is popular with campers, who set up along the tall outcroppings of cream-colored chalky rock.

The White Desert may be the crown jewel of Egypt’s safari destinations, but protected by weak regulations, it is now littered with the remnants of old campfires and garbage.

“People camp there and don’t clean up after they leave. They leave plastic bags, paper and cans,” said Dina Mahmoud, a Cairo-based tour guide who organizes an annual clean up of the White Desert.

Last year the government went further, setting up ticket fees and delineating paths for safari guides to drive on to protect the desert’s brittle white rocks.

Mahmoud El Kaissouni, environmental adviser to Egypt’s minister of tourism, wants to eventually limit the number of tourists who can enter the park each day.

“Less tourism through our fragile desert is better for us in the long run,” said El Kaissouni.

But El Kaissouni admits that long-term sustainability of the environment is only as good as the enforcement of the law, which in the White Desert is weak at best.

Guides often bring tourists into the park off-road through the back, driving over the rocks, avoiding both the ticket booth and watchful eyes of park rangers.

Although 120,000 entrance tickets to the White Desert were sold last year, El Kaissouni estimates that the actual number of tourists entering the park is triple that figure.

At his eco-lodge in Bahariya, El Sayed accepts that the government can’t easily control the entire White Desert. But he also doubts that Egypt would ever sacrifice tourism dollars to promote a greener industry with fewer visitors.

“Real ecotourism is against tourism. The government cares about money coming in and its customers being happy, and that’s it,” said El Sayed.

Others in Bahariya are equally skeptical. Abdel Salem is grateful that so many of his friends now have jobs, but he worries for the future of the oasis.

“Bahariya was like utopia. But tourism is changing it for the worse,” he said. “It will be very sad when the Hilton hotels start coming here.”