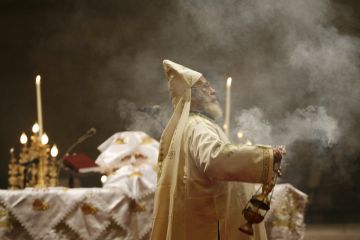 MANSHIET NASR, Egypt — An already dismal Christmas for Egypt’s Coptic Christians turned brutal overnight after a gunman opened fire into a crowd of worshippers outside a church.

The drive-by shooting occurred as the Christians were leaving a midnight mass in the village of Nag Hammadi in Upper Egypt late Wednesday on what is their Christmas Eve, killing at least seven people.

Millions of Copts in Egypt celebrate Christmas each year in early January because of differences between the Coptic and Gregorian calendars.

Security officials believe the attack was revenge for the alleged assault of a Muslim woman by a Christian man in the same province last year, the according to a statement posted on the website for Egypt’s Interior Ministry.

Even before the killing, many Copts in these slums on the eastern edge of Cairo were finding little reason to celebrate.

Economic woes, allegations of discrimination and now news of sectarian violence in the south are among a litany of complaints in Manshiet Nasr, home to thousands of Cairo’s garbage collectors, or zabaleen, a Coptic community that gathers waste from different parts of the city
to be sorted and recycled for profit.

But of immediate concern is their living environment. The trouble began last May, when the Egyptian government started killing the country’s estimated 300,000 pigs over fears of the H1N1 virus, or swine flu. With thousands of tons of raw garbage driven into the neighborhood daily, residents relied on the pigs to break down and consume excess raw waste from the rubbish. Without the pigs, the financial situation for Cairo’s zabaleen has gone from bad to worse, and in some cases dire.

Abdel Meseeh Fayez, 45, runs a small factory here that separates paper and plastic from bags of heaping waste. Before the slaughter, Fayez owned several hundred pigs. In addition to eating raw garbage, Fayez also sold some of the animals to butchers for meat, at a whopping $200 per pig.

But now, Fayez has to drive excess waste to a refuse lot, paying both for gasoline and the dumping.

“I’ve lost 70 percent of my monthly income,” said Fayez. “I can barely afford to buy clothes for my children.”

Throughout the neighborhood emerge similar stories of loss and despair, as many zabaleen are now out of work, looking for new sources of income.

Many Copts in Manshiet Nasr allege discrimination over the cull. For most in this majority Muslim country, pigs are viewed as filthy animals, and considered haram, or forbidden, by Islam.

“It was completely an unfair decision,” said Gamal Tawfik, who owned close to a thousand pigs before the slaughter. “There’s no rational explanation for this. Of course it was discrimination.”

After receiving international criticism over the fact that pigs were not capable of spreading swine flu to humans, government officials changed their tune, reclassifying the slaughter as a measure for public health in Egypt.

Initially, reactions turned violent, and more than a dozen zabaleen were injured or arrested after clashing with Egyptian riot police. Stones and glass were thrown, and the Egyptian government responded with tear gas to quell the demonstrations.

“It is a bitter fact that sectarian violence erupts from time to time in Egypt,” said Sidhom. And Christians are the victims in most sectarian strife.”

Egypt’s Coptic Christians represent roughly 10 percent of the country’s 80 million residents. Relations between the Copts and Egypt’s Sunni Muslims are generally calm, but sporadic incidents of violence have occurred, mostly over conversion, marital and land issues, and the bureaucratic hurdles involved in the construction of new churches.

In Egypt’s Qena province, where yesterday’s attacks occurred, clashes broke out last November when news emerged that a Christian was being held on suspicion of assaulting a Muslim woman. Muslims burned and looted several Christian storefronts in the area.

Wael Aboulmagd, Deputy Assistant Minister for Human Rights at Egypt’s Foreign Affairs Ministry, says that “the word strife is pretty strong” when it comes to relations between Christians in Muslims in Egypt. Though he admits that there will always be individual problems on a small scale, Aboulmagd says society, not the government, is to blame for any tensions between faiths.

“The vast majority of Egyptians enjoy their ability to believe in what they want and worship in the manner they wish,” said Aboulmagd. “In fact, I think the government deserves some credit for making this a national holiday.”

President Mubarak declared Christmas a national holiday in early 2003. The move drew much praise from Egypt’s Coptic leaders at the time.

Violence yesterday in Upper Egypt has left the zabaleen frustrated, feeling that sectarian clashes may never cease. But most acknowledge that outbreaks are too limited in scope to lose faith. Mebkhet Boutros, a plastics recycler, said that over 50 of his Muslim friends called to wish him a merry Christmas.

For Abdel Meseeh Fayez, the economic realities on the ground are much more important.
Like many Copts in Egypt, Fayez used to eat ham, a relatively cheap source of protein that was sold by several butchers throughout Cairo. But with no reserves left since the slaughter, most of the pork has all but dried up.

“Our holiday feast will definitely be smaller,” said Fayez. “Everything about this Christmas will be different than last year.”