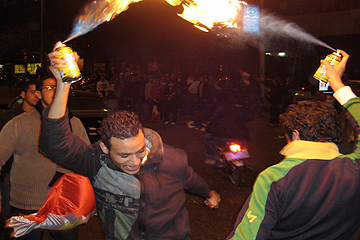 CAIRO, Egypt – I watched the game at the Al-Ohmda restaurant in Mohandessin, a residential neighborhood on the west bank of the Nile River just within eyeshot of the Great Pyramid at Giza. The atmosphere in the open-air cafe was electric, even hours before kickoff. Hundreds of men, women and children from all walks of life gathered in the small outdoor seating area to watch the game on large-screen TVs. They donned oversized wigs, wrapped themselves in flags and painted their faces in the national colors of red, white and black.

There’s never a quiet moment in this bustling capital of some 20 million people, and tonight was no exception. Car horns, whistles, noisemakers and the loud cracks of makeshift fireworks flooded the air of Africa’s largest city. Fans sang, shouted and screamed while hopping in their chairs. Throughout the game, a flutist and drummer danced around the restaurant, playing traditional Egyptian songs. And somewhere in the distance, a heart-pounding bass drum was hit to no particular rhythm.

As the teams battled back and forth on the pitch, Egypt supporters never lost faith. “Insha’Allah the goals will come soon!” fans screamed, literally meaning if it is the will of God. An old man with a distorted megaphone paced up and down the cafe’s cramped aisles, blaring out the words “Allahu-ahkbar!” — God is great — after just about every one of Egypt’s many attempts on Cameroon’s goal.

The Indomitable Lions seemed poised to take the lead on several tries, but it was Egypt’s unflinching midfield and strong team unity that proved too much for Cameroon in the end. It seemed fitting that Mohamed Aboutrika, the poster-boy of Egyptian football, scored the winner. After his goal, the crowd erupted with cheers, applause and chants of “Abou-Trika!”

“I am so happy. Tonight, Egyptians are all one,” screamed Ahmed Afifi, in between drags of an apple-flavored hookah pipe.

Outside the restaurant, thousands of Egyptians poured into Cairo’s already packed streets. All at once, hordes of men and women alike were everywhere — running, dancing, and above all, screaming. Young boys held lighters to aerosol spray cans, shooting bright orange flames into the air. Men beat spoons on metal trays, adding to the clamor. Traffic — already a major problem in Cairo — came to a standstill throughout the city, as fans climbed buses and trucks to wave their flags. Even a donkey-cart hauling garbage was halted by the throng of supporters.

I’ve been to soccer games on several continents, but nothing can ever beat the African game. Rivalry between nations, the quality of play, and the sheer passion of their fans makes it the best soccer in the world. To witness the enthusiasm and pride of Egyptians as they celebrated in their streets tonight is what makes soccer “the beautiful game.”

And for Egypt, the party is only getting started. Car horns will likely trumpet to the wee hours. In the city where people already have trouble sleeping, it’s likely most Egyptians won’t find much reason to turn in early tonight.